In 1993, the computer age was booming like never before.

When Vanderbilt’s Cancer Center was founded in 1993, the computer age was booming like never before. According to the Census Bureau, 28 percent of U.S. households had a computer and 46 percent of adults used a computer at work. At that time, IBM, Gateway and Apple computers were most popular, and Microsoft Windows became the best-selling operating system.

In 1993, the 3.5-inch floppy disk— that square, often colorful piece of plastic that wasn’t actually floppy—was king of data storage. Researchers at the Cancer Center could fit data for 3-5 studies, each having just 100 variables, onto one floppy disk.

Twenty years later, the floppy disk is a relic of a bygone computing era, and data is stored on servers with billions times the capacity of a floppy disk. With today’s genomic sequencing capabilities, research studies have as many as 3 billion variables. A whole human genome is about 400 gigabytes of data, which would fit on about 292,571 of those floppy disks from 1993. 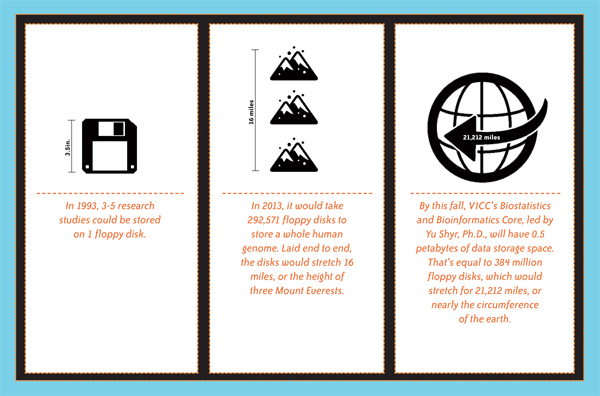