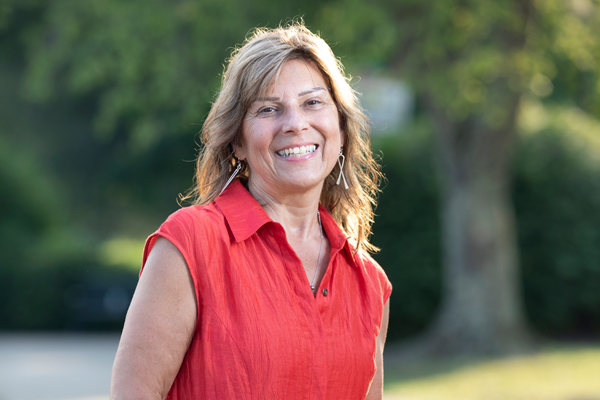 Cheryl Livingston’s lung cancer was detected early because she qualified for screenings as a former smoker. Photo by Erin O. Smith.

Lung cancer and colorectal cancer are the leading causes of cancer deaths in the United States, and even though more Americans now qualify at younger ages for early-detection screenings, many are missing out. The expansion of screening guidelines occurred simultaneously with the ongoing COVID pandemic when people are delaying these potentially life-saving procedures.

“Thankfully, because my cancer was caught so early, my surgeon Dr. Erin Gillaspie, was able to spare more of my lung,” Livingston said. “It’s a kind of cancer that is not typically caught early, so normally the standard of care would be to remove the whole upper lobe.”

The screening, which is a low-dose, computed tomography (CT) scan, detected her cancer at such an early stage she was also able to forgo chemotherapy.

The U.S. Preventive Services Task Force (USPSTF), whose recommendations are followed by major health insurers, expanded its lung screening criteria in March and more than doubled the number of eligible people. The USPSTF lowered the age from 55 to 50 and reduced the smoking history requirement. Then in May, the USPSTF expanded its recommendation for colorectal cancer screenings by lowering the age from 50 to 45.

Gillaspie, MD, MPH, FACS, assistant professor of Thoracic Surgery at Vanderbilt University Medical Center, had insisted that Livingston undergo lung screenings before the guidelines were expanded. At the time, she was treating Livingston’s husband, Gary Morris, for lung cancer in 2018. The couple, who had been friends since they were teenagers in Minnesota, reconnected at their 40th year high school reunion. She ended up moving to Tennessee in the autumn of 2014 to be with him. Soon after, they married and honeymooned in the Smoky Mountains, taking in the sights by motorcycle.

“They always came as a pair, so I got to see and know the two of them,” Gillaspie said. “It’s funny because a lot of people associate surgeons only with the meticulous performance of surgery in the operating room — but one of the parts of my career that gives me the most joy is getting to know my patients in clinic, and after surgery, getting to celebrate cancer-free anniversaries with them.

“One day, we were all talking about the challenges of smoking cessation. Smoking is an addiction that permeates every aspect of a person’s life, so it is extraordinarily difficult for people to quit. I was chatting with Cheryl about how she had overcome that addiction. In that moment, I paused our conversation and went through the checklist on lung screenings and realized that she met all the criteria.”

When Livingston underwent her first lung screen, a spot showed up. Radiologists continued monitoring it at six-month intervals. Not wanting the pandemic to delay her monitoring, she kept her next six-month appointment, and when the spot hadn’t gone away, a biopsy was performed in the summer of 2020. The biopsy found cancerous cells.

Livingston then underwent surgery on Sept. 11, 2020 — about nine months after her husband’s death. Due to early detection, Morris had made it through his lung surgery — with a great outlook for long-term survival. However, in 2019 he sustained serious chest injuries in a motorcycle accident. After a long hospitalization spent stabilizing his injuries, he went home to continue to heal and prepare to undergo one last accident-related surgery. Unfortunately, he unexpectedly died at home.

“Gary knew that I was being monitored before he died,” Livingston said. “He was very concerned about me, so surviving lung cancer is bittersweet for me.”

Gillaspie said Morris is a patient she will always hold dear.

“Gary would often send messages through My Health at Vanderbilt to me — just to say, ‘I am thinking about you,’ or ‘Thank you so much for what you do for me, what you do for everybody,’ or ‘I hope you have a wonderful day,’” she said. “He would do that at random times unrelated to any visit. I cherish the messages and the knowledge that Gary, in his life, brought so much to so many people. Those notes, especially after a long day in the operating room, are so inspirational and an incredible reminder of the lives we are fortunate enough to be part of. He was just a wonderful man.”

Besides lowering the age for lung screening, the USPSTF reduced the number of smoking history pack years from 30 to 20. A pack year is a way of calculating how much a person has smoked. One pack year is equal to smoking an average of 20 cigarettes, or one pack, every day for a year. For a person who has smoked half of a pack of cigarettes per day for 30 years, that measures out to 15 pack years.

A large number of people qualify for the screenings in Tennessee, Kentucky, Alabama and Mississippi because a higher percentage smoke than in other areas of the nation.

“The rate of new lung cancers in Tennessee is significantly higher than the national rate,” Gillaspie said. “We actually rank as one of the highest states in the country for new lung cancer cases for our whole population. Unfortunately, we continue to see a lower early detection rate among Black Americans in Tennessee.”

Those death rates can be decreased if fewer people smoke, more people quit and if cancers are detected earlier.

“Right now, the majority of people who are diagnosed with lung cancer are diagnosed with an advanced stage, meaning the cancer has already spread outside the lung to lymph nodes and other organs,” Gillaspie said. “Lung cancer therapy for advanced stages has completely transformed over the last decade. We have treatments available that none of us had ever dreamed of 20 years ago, but still the survival rate for someone who presents with stage 4 lung cancer is only 6% at five years. If we catch the cancer early, for example as a stage 1A1, the five-year survival is 89% by comparison. Every time the cancer grows by a centimeter, we see a significant drop-off in the rate of survival.”

Typically, with early-stage lung cancer, there are no symptoms. Livingston had none when hers was detected and the tumor was still small.

“Thanks to CT screening for lung cancer, Cheryl’s cancer was caught early, and she was able to undergo a minimally invasive, robotic, lingula-sparing, upper lobectomy,” Gillaspie said. “We were able to take out a smaller amount of her lung, using special instruments through 8-millimeter incisions on her chest wall. She was able to go home two days after surgery.”

In lowering its recommended age for colorectal cancer screenings, the USPSTF agreed with the American Cancer Society, which had advocated in 2018 for screenings to start at age 45. The change is because of an alarming trend. Since the 1990s, the rate of colorectal cancer has more than doubled among adults younger than 50, according to the National Cancer Institute.

“An initial symptom is change in bowel habits, which includes color of stool, the consistency of stool, having blood when you wipe,” Eng said. “Symptoms of more advanced disease are weight loss, night sweats, loss of energy. Another symptom is being anemic, particularly if you are iron deficient. For rectal cancer, early symptoms besides changes in stool are urgency and a feeling of incomplete evacuation and pressure when sitting. Some rectal cancer patients have told me they’ve been misdiagnosed with hemorrhoids. If you have a problem that doesn’t resolve itself on its own within one or two months, you need to go back to your primary care physician or go get a second opinion.” 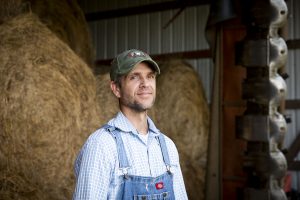 Winn Phillips, 41, of Bell Buckle, Tennessee, noticed bleeding in January 2020 that continued, so he scheduled a colonoscopy two months later at a hospital near his home.

“COVID hit and it got canceled and put off,” said Phillips, an automobile mechanic, farmer and U.S. Army veteran.

Phillips persisted in getting a colonoscopy scheduled. “I finally got one scheduled with the VA hospital in August. That’s when the cancer was found.”

His determination likely saved his life.

The Veterans Affairs Tennessee Valley Healthcare System hospital in Nashville referred him to Vanderbilt-Ingram. He received rounds of chemotherapy and radiation before undergoing surgery on June 14.

“The surgeon removed about a foot of my colon,” Phillips said. “Right now, I have an ileostomy. In September, I’ll go back for another surgery. They will reverse that and put me back to normal.”

He urged anyone with symptoms that might be indicative of colon cancer to ask their physician about scheduling a colonoscopy.

“The earlier you catch it, the easier it is, especially if it is just a polyp,” Phillips said. “I think if you need to be screened, you should be able to get screened no matter what age you are. The recommendation was lowered to 45, and I am only 41.”

Eng urges people to start undergoing colorectal screenings as soon as they qualify for them, but not to let age guidelines or concerns over insurance coverage be barriers. A colonoscopy is the gold standard because polyps can be removed during the procedure before they develop into cancer, but there are other screening options.

“If you are younger and having symptoms, bring it to the attention of your doctor and ask about a colonoscopy,” she said. “If the symptoms are consistent with rectal cancer, a flexible sigmoidoscopy might be a reasonable enough test. At home, you can do a Cologuard test. At the end of the day, any testing is better than no testing.”

The nation’s top cancer experts worry about a backlog of missed diagnoses resulting in cases that are harder to treat because of the impact of the pandemic. National Cancer Institute Director Ned Sharpless, MD, warned about collateral cancer deaths beyond the pandemic during a virtual visit at Vanderbilt University in November 2020.

He warned that modeling estimates indicate that 10,000 excess deaths from breast and colorectal cancers could occur because of delayed screenings. The USPSTF also recommends screenings for breast cancer and cervical cancer. However, other advisory bodies recommend that people consult with their health care providers about screenings for additional types of cancers, including skin cancer, prostate cancer and oral cancer.

“The cancer community should take collective action so that we don’t end up exchanging one public health emergency for another one,” Sharpless said.