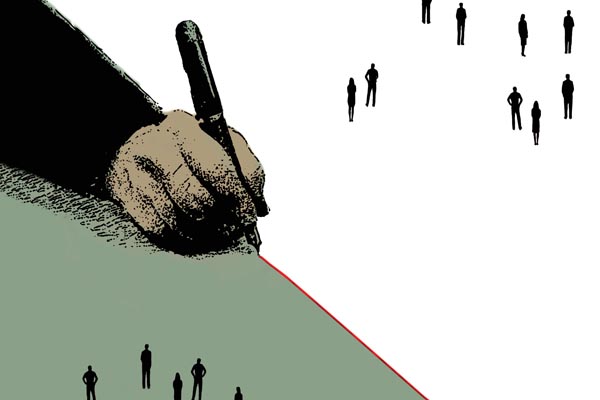 Karen Winkfield was a senior in high school, skipping class and hanging out in the cafeteria, when she felt a tap on her shoulder. Mrs. Miller, a mild-mannered woman with dark curly hair who taught English, wanted to know why her star student had suddenly become a slacker. Winkfield confided that her parents would not let her go to college. So, Miller, coordinating with other educators, opened a pathway.

Winkfield, MD, PhD, professor of Radiation Oncology at Vanderbilt University Medical Center (VUMC), executive director of the Meharry-Vanderbilt Alliance and professor of Medicine at Meharry Medical College, didn’t realize then how fortunate she was to live on the ‘good side’ of a school district line. A few blocks from her home in Long Island, New York, the other school district didn’t have such a strong support system.

America’s social structure is built upon foundations that are as apparent as brick barriers, but it is also delineated by boundaries as invisible as air. Winkfield helps others navigate the invisible lines of systemic racism, unconscious bias and health inequities. “Sometimes, victims of racial injustice are not quite aware of how these practices, such as redlining (banks basing mortgage approvals based on neighborhood location) and housing discrimination, set them up for failure for the rest of their lives,” Winkfield said. “I didn’t realize it, not until I started in college.”

She was recruited to Vanderbilt from Wake Forest University and began working in Nashville in November. Winkfield succeeds Consuelo Wilkins, MD, MSCI, professor of Medicine, who had served as the Alliance’s executive director since 2012. Wilkins was named in 2019 to the newly created positions of Vice President for Health Equity at VUMC and Associate Dean for Health Equity with the Vanderbilt School of Medicine.

To pursue a college degree, Winkfield had to break through a barrier by defying the orders of her parents, devout Jehovah’s Witnesses, a religion that teaches, according to its official website, that higher education “can lead to moral and spiritual dangers” and that even though many people attend universities to attain “noble goals” and “improve themselves and the world” its members “have chosen a different path.” Only 9% of Jehovah’s Witnesses obtain an undergraduate degree and just 3% achieve a postgraduate degree, according to Pew Research Center. Winkfield almost acquiesced and let her ambitions wilt.

“I was cutting class when I had been at the top of my class,” she said. “I could have easily been salutatorian or valedictorian. I ended up falling to third in my class of 270 because I was fooling around my senior year.”

Miller coordinated with Winkfield’s high school vocal teacher and guidance counselor to get her into college. The dean of admissions at Binghampton University also assisted, helping her declare independence from her parents so she could apply for financial assistance and scholarships. She received a President’s Scholarship.

Her parents’ religion had been a brick barrier for Winkfield, but once in college she became intrigued by how systems and programs affected people’s lives. She had initially majored in music, but after a four-year break from college when she worked for a law firm, she returned to Binghampton and graduated with a degree in biochemistry. She then went to Duke University School of Medicine, receiving medical and PhD degrees and becoming the second Black woman to graduate from the Medical Scientist Training Program at Duke. She completed her residency training at the Harvard Radiation Oncology Program in Boston.

During her residency, she had the opportunity to train and rotate at six different hospitals and observe protocols. When it became time to apply for a job, she approached the leadership at Massachusetts General Hospital (MGH) about establishing a comprehensive clinical program focused on hematologic malignancies in the Department of Radiation Oncology after first consulting with her medical oncology colleagues to make sure they were on board.

“It wasn’t me coming in like a bull,” Winkfield said. “I actually had their support before I approached the department leadership. So, they hired me expressly to build that. I think there were some who didn’t think I would succeed. In fact, I was told that by some folks. In some ways, it was their way of getting me to stay on faculty to do other things. I was tasked with not only building and developing a new program for hematology, I was also asked to staff the breast clinic, which is one of the busiest services at Massachusetts General Hospital. While I was very clinically busy, I also had to build a service on top of that. I essentially had two full-time jobs.”

She helped develop the first multidisciplinary clinic for patients with hematologic disorders at MGH.

“A lot of people don’t think there is a role for radiation in the treatment of blood cancers because they tend to be systemic disorders. That is, in fact, wholly untrue,” Winkfield said. “Radiation is highly effective. Most of these blood cancers are very sensitive to radiation therapy. In fact, radiation used to be the only treatment for lymphoma up until the 1950s. Folks forget about that. It actually had a very good cure rate. We have a much better cure rate now with the addition of chemotherapy. Particularly for those with early-stage disease, it is important to have a combined modality approach.”

While at Massachusetts General, Winkfield was a co-principal investigator of a $3 million grant that established the Lazarex-MGH Cancer Care Equity Program, an initiative to improve clinical trial access and enrollment in vulnerable populations. She was responsible for the community outreach and education component of the grant. She continued working in this field in 2016 when she went to Wake Forest University, where she was associate professor of Radiation Oncology and served as associate director of Community Outreach and Engagement for the comprehensive cancer center and director of the Office of Cancer Health Equity from 2016 to 2020.

During her years of practicing radiation oncology, she observed a health disparity with African American patients experiencing sudden skin complications from radiation treatments.

“This is an example of the importance of workforce diversity,” she said. “I was seeing a problem where my patients’ skin looks great then all of a sudden their skin turns blackened one day and, the next thing I know, they are having skin breakdown. I’m thinking this happened quickly, whereas white patients or patients with paler skin had more subtle changes that happened over the course of the therapy.”

“I happened to start working with a group that had a pig model,” she said. “Pig skin is very close to human skin. Guess what color the pigs were? They were white, so all of this research to establish measurement of radiation injury was done using a model that reflected white skin.”

She began doing a research with a pig model that is more similar to darker skin tones of African Americans.

“That’s one of the things that I am working on now. I presented this work at a Radiation Research Society meeting in 2019. I just finished our validation set, and need to get that paper published,” she said. “This is an area we really need to understand and study, so that we make sure all of the survivorship programs and system management skills that we have as clinicians are applicable to all people and not just people with light skin.”

Winkfield has led national initiatives to achieve better diversity. She is co-founder and director of the Association of Black Radiation Oncology. She served as chair of the American Society of Clinical Oncology’s (ASCO) Health Disparities Committee from 2016-2017. She led a taskforce on improving racial and ethnic diversity in the oncologic workforce that resulted in the development of ASCO’s strategic plan for workforce diversity. She was lead author of that plan. 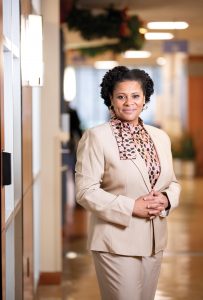 “I’m struck by the fact that a lot of times — I wouldn’t say there is a lack of awareness — but there is a complacency,” she said. “It is important for individuals to see representation, representation at the highest levels, whether it be in government or in educational situations.”

The Meharry-Vanderbilt-Tennessee State Cancer Partnership is an initiative that fosters research collaborations between Vanderbilt-Ingram Cancer Center and two historically black colleges and universities in Nashville with the goal of reducing the high cancer incidence and death among minorities. Winkfield is leading the partnership’s cancer outreach core.

“I believe in going to the communities and hearing from them,” she said. “Before we think about what research needs to be done, let’s go to the community and ask them. Let’s meet people where they are.”

The need for progress is urgent.

“We know that the community that is most impacted, most affected, by cancer is the Black community,” she said. “Unless we have researchers and providers, meaning oncologists and other health care providers, who are at the forefront, the problem and the gaps will only continue.”

Winkfield has been on both sides of the health care system. She was a longtime caregiver for her husband, who passed away in 2018 from diabetes complications. She knows firsthand the frustrations people experience navigating health care systems and insurance approvals.

“I want to make sure that patients don’t have to worry about coordination of care, that they don’t have to worry when their next appointment with their doctor is,” Winkfield said. “I do that because of the experiences with my husband. I saw how disjointed the health care system is. I have had patients who have come to me and said, ‘I can’t believe a radiation oncologist is managing my care,’ because in some settings

oftentimes radiation oncologists can be seen as technicians instead of clinicians.”

If the nation is going to effectively make an impact on health care disparities in the Black population, a holistic approach is necessary, she said. The work cannot be done in a vacuum.

“One of the things I am hopeful about is that with all the emphasis now on racism we can stop talking about health disparities focusing on just race because race is a social construct,” Winkfield said. “We really need to start talking about what the root of the problem is with health disparities, which is racism and begin to deal with it. We need to understand the social determinants of health, and racism impacts that greatly.

“Until we start to talk about that as a nation, until we start to say, ‘Let’s take ownership of the fact that this country was built on the backs of slaves, and there is still systemic racism in existence,’ we will never be able to work out the issues to make sure there is equity in health care.”