From the Laboratory Bench to My Own Bedside

I had been studying breast cancer for more than 20 years when I was diagnosed with invasive ductal carcinoma. My professional life was filled with hours of watching tumor cells grow and spread on plastic dishes, marveling as they branched and blebbed in three-dimensional matrices, monitoring the size of lumps from spontaneous or transplanted breast tumor tissue in experimental mouse models, and if I was lucky, watching their growth slow or even seeing them shrink when a new experimental therapeutic worked in pre-clinical testing.

Over the years, family and friends had come to me for information, reassurance and comfort in the face of their diagnoses. I’d lost a close cousin to the ravages of aggressive breast cancer. She was only 37 years old.

When my mother was diagnosed with breast cancer, I emptied her surgical drains after her double mastectomy, caring for her with a toddler clinging to my leg and a baby balanced on my hip. I brought meals to a close friend who was diagnosed with stage 3 breast cancer, visiting with her as she endured chemotherapy, surgery, reconstruction, and finding her new normal while our pre-teen daughters hovered in the background, their infectious laughter a balm to the devastation wrought by the big “C.”

After all of this, I thought I knew breast cancer. Then it kicked me in my left breast and flung me, bleeding, on the curb of uncertainty. Turns out, I had a lot to learn.

When Brent Rexer, MD, my medical oncologist, walked in to my first appointment at the Vanderbilt Breast Center, he greeted me with kindness and a wry smile. “It’s good to see you again, though I wish it was under better circumstances.” I’d known Brent for years. He and his wife were classmates of mine in graduate school, and we’d crossed paths at research seminars in the Vanderbilt-Ingram Cancer Center. I’d crossed paths with many of the clinicians and providers who would become a part of my care team. I was lucky. I knew I was in great hands.

When I got cancer, I came home.

What did I learn from the laboratory bench to my own bedside? For starters, I learned that nothing, not even a career spent tackling this disease, can prepare you for your own diagnosis. I was as shocked, devastated, and numb as any woman who hears those three terrible words — you have cancer.

I learned that radiologists save lives. The radiologist who spotted the suspicious spot on a routine mammogram and later during an ultrasound examination has over 30 years of experience in the field. Because I’m a geek, I always ask to see what’s going on in any exam. I’m “that patient,” the one who’ll ask if I can look at the computer screen after a boob squeeze, à la mammography, and in the middle of having the goo-covered wand gliding over my exposed boob during an ultrasound. When I had the chance to look at my tumor and a previously detected benign lesion side by side, I realized that this radiologist’s years of training and sharp eyes (that could tell the difference between two grainy spots on an ultrasound that looked the same to me) caught one tumor before it could become immediately life threatening. We later learned that I had two tumors of the same subtype in the same breast, which is pretty rare. But we would not have caught the smaller one, which was actually growing faster, had my radiologist not spotted the larger mass.

I learned that I had the option of saving most of my breast tissue. Thanks to years of study following outcomes of patients who chose lumpectomy and those who chose mastectomy as surgical options, we know that choosing breast conserving surgery does not increase a woman’s risk for distant recurrence. There is an increased risk for local recurrence, but that can be mitigated with radiation therapy. I was fortunate enough to be a good candidate for partial mastectomy followed by oncoplastic reconstruction, which is essentially a breast reduction and lift. I’m not going to lie – it’s like being 18 again. I’m perky! Better still, it preserved sensation in my breast skin and nipples, and the recovery time was much shorter than with a mastectomy. Note: there are no wrong choices, only informed choices. The decision to keep or remove one or both breasts after a cancer diagnosis is a deeply personal one. Each individual patient must consider the options, the benefits and risks, and decide what is right for her. This was the best decision for me, and I’m glad I was a good candidate for this surgical option.

I learned that surgeons are brilliant, and by working together, they can give you back much of what you lost. My surgical team, including Ingrid Mezoely, MD, and Galen Perdikis, MD, worked together on a plan that allowed Dr. Mezoely to remove my tumors and Dr. Perdikis to perform oncoplastic reconstruction just after. A year and a half later, I am pleased with the result, like the way I look and feel, and while I’ll never be the same as B.C. (before cancer), my new normal is better than I ever imagined.

I learned that radiation therapists are some of the nicest, funniest people on the planet. My go-to coping mechanism is humor. When I came in for a dry run prior to my first radiation therapy, the technician placed several markers on my left breast in order to properly align the beam for more precise targeting of the area where the tumors were removed while minimizing potential damage to my heart and lungs. The shiny markers formed a cute little circular pattern, so I joked that we could make it into a pastie. All I need would be some glitter and a tassel. We both cracked up, and I was able to relax, hold my breath for the designated time, and get prepared for my treatment course. During those visits, I talked with the therapists and Bapsi Chakravarthy, MD, about topics big and small — kids, work, life, research, politics, favorite books and television shows, and all manner of topics that made the discomfort during the last weeks of treatment much more bearable. 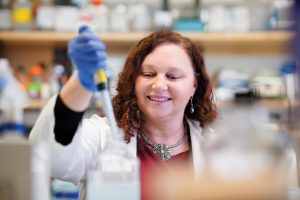 I learned the depths of compassion and generosity of my colleagues, both in the laboratory setting and in the clinic. Disclosing a cancer diagnosis to your employer and co-workers can be frightening. Will you be at risk for losing your job (a reality for too many Americans)? Will your colleagues see you and treat you differently? Will moving forward be awkward, with colleagues feeling uncomfortable and at a loss for words? I was lucky and found support and comfort, with offers to help keep the research in my laboratory going while I was out on medical leave, with encouragement, and with the honor of serving as a reminder of what all of us in cancer research work for — helping patients diagnosed with cancer survive and thrive.

I learned that, having been on both the research side and patient side of the breast cancer experience, I have a unique perspective and the opportunity to help people outside of the laboratory. Scientists are very good at communicating with one another within the research community, but I believe we need to expand our efforts to communicate with the public. After all, most of us are funded by the National Institutes of Health, which is in turn supported by tax dollars. I feel an obligation to be able to explain my work and why it’s important to anyone who asks, be it my 11-year-old son or a person sitting next to me at the airport. I have a new mission: to be an advocate for science and bring science to the public, particularly when it comes to breast cancer. Sadly, we live in an age of fake news and pseudoscience, made worse by the pervasive anti-intellectual and anti-science political culture gripping the United States and much of the world. The internet and social media are plagued by scammers selling “alternative medicine” and woo woo “cures” for cancer. Knowledge is power, and lack thereof can be deadly. I can lend my voice to fighting myths and scams for the public good through speaking, blogging and writing.

I learned that there will be good days and bad days, and that it’s OK to seek help. My prognosis is great, but my type of breast cancer can recur years or decades after surgery and treatments are complete. That thought often keeps me up and night and serves as a source of worry. Shortly after my diagnosis, I worked to the point of exhaustion in the lab, at home, and on my side gig, staying up late in the name of productivity and maximizing creativity, but I wasn’t fooling anyone. I was terrified. After a year and a half of ups and downs, I acknowledged that I was not fine, and that I needed help in the form of therapy. I’m glad I did. Tackling my fears and anxieties head on has helped me be my best self, accept my new normal as a cancer survivor and focus on living the life I have with joy and purpose. And when I go back into the well of despair, as many survivors do, I now have the tools to climb back out and get back on track, which is very empowering.

Finally, I learned that I’m still learning. I have the best job as a researcher in that I get to be a lifelong learner. So many strides have been made since I entered the field, when Herceptin was first developed for HER2-positive breast cancer. Now, we have so many new tools in diagnostics and prognostics (3D mammography and OncoType DX testing), treatments (aromatase inhibitors, CDK inhibitors, and immune therapy), and amazing new treatments on the horizon. We still have so much work to do, but we are making a difference, and I am privileged to be a part of that process.