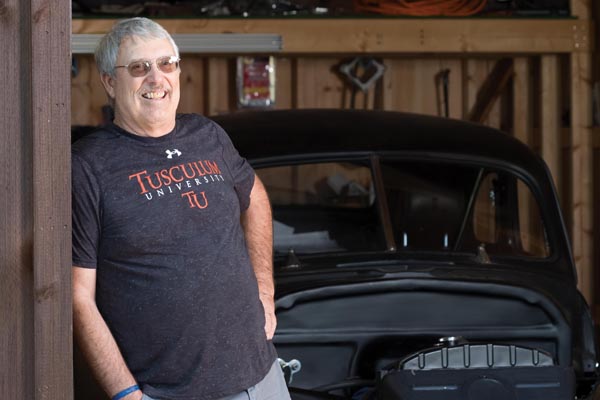 Small but tenacious, the remnants of the tumor in Ronnie Smith’s body had defied multiple rounds of chemotherapy and radiation.

“They were the cockroaches of cancer cells,” Smith said.

An elementary school custodian from East Tennessee, he was diagnosed with diffuse large B-cell lymphoma in November 2016 just after turning 67. A year later, his cancer became resistant to treatment right after the U.S. Food and Drug

Administration (FDA) approved CAR-T for his medical condition. A clinical trials site, Vanderbilt-Ingram Cancer Center (VICC) had been one of the first places to offer the treatment, which entails removing and re-engineering a patient’s T cells so they can target cancer, and then infusing those T cells back into the body.

The CAR-T program, which is a service line of VICC Stem Cell Transplant Program, recently received Immune Effector Cell accreditation from the Foundation for the Accreditation of Cellular Therapy.

“We’ve joined the few institutions in the country who are offering cellular therapy, and as a matter of fact, we’re the first people in the nation who started CAR-T cell therapy for multiple myeloma,” said Adetola Kassim, MBBS, MS, professor of Medicine and interim director of the VICC Stem Cell Transplant and Cellular Therapy Program.

The treatment is so new that researchers continue to monitor response rates in patients, but so far, the results have been impressive.

Smith came to VICC Stem Cell Transplant in January 2018 when he underwent apheresis, having his T cells removed. The T cells were then shipped to a laboratory in California to be reengineered to produce chimeric antigen receptors (CARs) on their surface, enabling them to identify a specific protein on cancer cells. Once attached to the protein, they will kill the cancer cell. He received his CAR-T infusion the following month after having undergone low dose chemotherapy, which set the stage for the re-engineered T cells to do their work.

“CAR-T cells allow us to harness the power of the re-engineered immune cells against cancer,” said Madan Jagasia, MBBS, MS, MMHC, MSCI, chief medical officer of VICC and holder of the Beverly and George Rawlings Directorship. “We expect this treatment to become more prevalent over time.”

Unlike most other cancer therapies, CAR-T is a “one time, done deal,” said Olalekan Oluwole, MBBS, MPH, the physician who treated Smith. After a patient’s T cells are re-engineered, that patient receives just one infusion.

Smith’s follow-up PET scans conducted in May and in August 2018 were clear. The ‘cockroaches’ were gone. Oluwole, who led CAR-T clinical trials at VICC, said 40 to 50% of patients who received CAR-T were disease-free two years later without further treatment.

“These are really exciting times,” Oluwole said. “Five years ago, none of this existed as a real option for patients. It’s all completely new. It has really opened doors for more cures in lymphoma and other blood disorders.”

Clinical trials at VICC and elsewhere led to the FDA in 2017 approving CAR-T for diffuse large B-cell lymphoma that had relapsed or proven resistant to treatment.

Some patients have a reaction to the treatment called cytokine release syndrome, an inflammatory response by the immune system that can cause fever, nausea, headache, rash, rapid heartbeat, low blood pressure and trouble breathing.

Severe reactions can be life-threatening.

Smith said he didn’t suffer any side effects.

“Dr. Oluwole was my head man, a super nice fellow,” Smith said. “I was very fortunate to have him as my doctor.”

CAR-T shows promise of being effective for other lymphoid malignancies, Oluwole said, noting that there are clinical studies underway at VICC for other types of lymphoma, leukemia and myeloma with additional clinical trials in the pipeline.

Smith said he’s thankful for CAR-T and grateful to his wife, Janie Smith, who made sure he had whatever he needed throughout the course of his treatment. He said he appreciates the medical team in Kingsport, Tennessee, who provided great care before referring him to Vanderbilt, as well as all the nurses who were at his bedside there and in Nashville.

He’s retired now, spending his time transforming a 1946 Chevrolet into a street rod. He’s regaining his strength day by day.