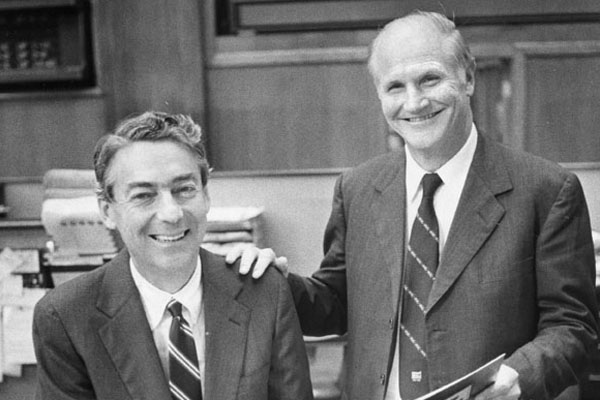 Luke Simons and James C. “Jimmy” Bradford Jr. worked alongside one another for decades at J.C. Bradford & Co., an investment banking and brokerage firm, but it wasn’t until six years after Bradford’s death that the full prospectus of their journeys became clear.

Simons, who was diagnosed with metastatic melanoma in July 2016, has a fighting chance against the disease because Bradford threw the first punch.

Bradford made an initial gift that grew into an endowment and put Vanderbilt-Ingram Cancer Center (VICC) at the forefront of treatment discoveries for the deadly skin cancer.

“This is my 10th infusion; it’s working,” Simons said as he sat in the infusion clinic at VICC receiving the immunotherapy Keytruda intravenously. “After every four infusions I get a scan. The first scan showed my tumor to be down by 50 percent. My second scan showed it to be down by another third.”

VICC was the leading site for patient participation in trials that led to U.S. Food and Drug Administration (FDA) approvals of Keytruda and two other melanoma immunotherapies, which are drugs that spur people’s immune systems to attack tumors. The James C. Bradford Jr. Melanoma Fund supported that research and other scientific inquiries.

When Bradford was diagnosed with metastatic melanoma at the end of summer 2008, VICC was already involved in clinical trials of precision medicines that targeted genetic mutations in tumors. One promising drug, PLX4032, which would later be FDA-approved and marketed as Zelboraf, was producing dramatic results. But only 40 to 50 percent of melanoma cases proved to be positive for the mutations this drug targeted. Bradford’s tumor was not a match. Nor was it a match for any other clinical trial. His only treatment options were standard chemotherapy, radiation and surgery.

Bradford died on March 8, 2010—13 days after donating his tumor to VICC for further study. His tumor was the first for which whole tumor genome sequencing was deployed at VICC. Researchers mapped out a new treatment pathway, identifying a mutation in that tumor and discovering that another class of drugs called MEK inhibitors could target this mutation. The research was the cover story in the September 2012 issue of Cancer Discovery. The findings expanded treatment options for melanoma patients.

Bradford and his wife, Lillian “Tooty” Bradford, had funded two Discovery Grants for the melanoma research. Then their friends, led by Simons and his wife, Susan Simons, helped build the endowment, which was established in 2011.

Luke Simons didn’t know then that he would benefit from the array of melanoma research supported by that endowment.

In 1963, Simons joined J.C. Bradford & Co., the company Jimmy Bradford’s father had founded, and worked there until 2000 when the company was sold to Paine Webber, which was then acquired by UBS. In his early days with the company, Simons had been Bradford’s roommate until he married Susan in 1964.

The gift of better health and a better future

Jimmy Bradford’s final gift spurred groundbreaking research on melanoma. Now his onetime colleague and friend is among the thousands of patients who are benefiting.

“We had a great trust,” Simons said. “Neither of us had a gigantic ego, and we trusted each other. It was unique friendship, I think.”

Established in 1927, J.C. Bradford & Co. was the first Nashville-based firm to buy a seat on the New York Stock Exchange. The firm survived the Great Depression and grew over the decades until it had offices in 14 states.

“It was management by walking around,” Simons said. “Whenever we were down at trading desks, we’d be yakking. One of my funniest memories is we had promoted a guy to be head of a department. He asked ‘Who do I report to?’ I said, ‘Either one of us.’ He just looked at me.”

That management style nurtured a good work culture, he said. The company operated on a partnership structure among its top brokers.

“When Jimmy had just come into the company, Luke was hired,” said Tooty Bradford. “And then as Mr. Bradford (company founder) got older and took a lesser role, and Jimmy assumed leadership and became CEO, then Luke, over time, became the Managing Partner. But Luke and Jimmy were much more than that. They were the closest of friends. After they sold the company, they got an office together. They were together just about every day of their business lives.”

Luke and Susan Simons helped Tooty Bradford organize a dinner at her home to kick off the campaign for the endowment. Those who had been partners at J.C. Bradford & Co. were invited. Between 80 and 90 of them attended.

Although people at the dinner party were hopeful, no one really knew if the endowment would produce results.

“I’m honestly very pleased and surprised,” Tooty Bradford said. “I think the scientists may have been surprised that they found some markers for which medicines were already in the pipeline and that people right then could be helped. It was really like hitting a home run.”

Susan Simons, a member of the VICC Board of Overseers, said there are misconceptions about funding cancer research. One is the expectation that every inquiry will yield a scientific breakthrough or new treatment, she said, but each quest that comes to a dead end narrows the paths to be explored. Another misconception is that VUMC receives so much federal funding that VICC doesn’t need money, she said. The truth is that private investment fuels the new scientific information required to secure those grants.

Luke Simons says angel investors—a financial term generally defined as a person with enough wealth to invest capital into someone else’s business startup—is a good way to describe the people who support research at VICC.

“We have participated in Discovery Grants, a couple of them,” he said. “They help the researcher who is working on an idea get it to the stage where he or she can go the National Institutes of Health (NIH) to seek funding.”

Susan Simons points out that someone doesn’t have to be wealthy to be an angel investor. The VICC Ambassadors is a group of professionals who pool their money and also solicit small contributions from individuals to fund Discovery Grants, allotments of $35,000 to $50,000 that support early research initiatives.

“That’s how Vanderbilt and other institutions are able to get the [NIH] grants that they get,” she said. “It’s because of philanthropy on the front end.”

The James C. Bradford Jr. Fund in Melanoma Cancer Research originated from a Discovery Grant. So have millions of dollars in NIH grants for VICC.

“With the original gift, Jimmy wanted to accelerate discoveries for others, and he has,” said Jennifer Pietenpol, Ph.D., director of VICC and executive vice president for research at Vanderbilt University Medical Center (VUMC).

“His gift contributed to Vanderbilt-Ingram’s ability to be a leading center for investigation of new immunotherapies for melanoma,” added Pietenpol, who is also the Benjamin F. Byrd Jr. Professor of Oncology. “Luke Simons is one of many, many patients who are being helped.

“It is truly amazing to see the power of discovery, due to the generosity of individuals who see the bigger picture.”

Luke Simons discovered he had metastatic melanoma by accident. After slipping and hitting his head on a hardwood floor, he was taken to a hospital emergency room where MRI and CT scans revealed a lesion on his brain.

Plans to fly out to Alaska the next morning for a vacation with grandchildren had to be cancelled.

Instead of gliding by glaciers or watching for whales, the couple wound up sitting in an office with Reid Thompson, M.D., the William F. Meacham Professor of Neurological Surgery. Brain surgery was going to be unavoidable. Susan Simons had suspected something was amiss.

“I could tell he wasn’t walking right before he fell,” she said. “I had dragged him in to see his primary care doctors. I guess it was a couple of days before he fell. There was conversation about seeing a neurologist when he got back from Alaska, but that was going to take time. We are very fortunate that he had that fall and we found out before it got worse.”

About a year after Jimmy Bradford’s death in 2010, Luke Simons had gotten a skin check. A mole removed from his back showed up as melanoma in a biopsy. He underwent surgery to have the surrounding tissue excised and hoped that was the end of it; however, the lesion on his brain turned out to be melanoma. The cancer had come back and spread.

Besides the tumor on his brain, scans showed tumors in his lungs and pancreas. After receiving Keytruda treatments following surgery and radiation treatments, the tumors on his pancreas were no longer visible. The ones on his lungs were shrinking.

Although more treatments than ever before are available for the various tumor mutations that occur with this skin cancer, not every patient with metastatic melanoma has access to a new and promising drug therapy. Work continues at VICC to expand treatment options. There are 14 research initiatives currently underway at VICC involving melanoma, including nine clinical trial treatments.

Except for taking time out of his day for afternoon naps, Luke Simons has been able to maintain his normal schedule.

“I’m lucky as hell on two accounts: finding the cancer and being at the right place at the right time,” he said.

Next Post: Cancer sleuths span the globe tracking down a prolific killer