Sarcoma crept into their lives in different manifestations. An aching hip, a bump on the shoulder, a swollen leg.

A rare cancer that materializes in bone or soft connective tissue, sarcoma is a decoy disease. It can pop up in virtually any area of the body. Its symptoms vary according to the location of the tumor. It has more than 80 subtypes that can look similar under a microscope. And it can take on the characteristics of common cancers as well as benign tumors. Sarcoma is like a wolf in sheep’s clothing. It frequently slips past doctors and evades treatment.

Marshall Billingsley has been in remission from Ewing sarcoma since 2011. Photo by Daniel Dubois.

Marshall Billingsley had an aching hip the summer before his junior year at Hillwood High School in Nashville. A rugby player who had been doing a lot of running over the summer, he thought the pain was related to an irritated sciatic nerve. He tried alternating his workouts with two days of rest, but that didn’t help.

“It eventually got to the point where I wasn’t even running and I was getting this constant pain,” Billingsley said. “It didn’t matter if I was standing or sitting. We moved up my physical for the new school year just because the pain was getting worse and worse.”

His doctor had the hip X-rayed then referred him to an orthopaedic specialist who ordered an MRI and sent him to Vanderbilt University Medical Center (VUMC). Billingsley was diagnosed with Ewing sarcoma on Oct. 4, 2010. It had spread.

The Vanderbilt Sarcoma Center, which treats a high volume of patients, has teams of highly specialized physicians with experience combating the many subtypes of sarcoma. This multidisciplinary approach makes a critical difference in patient outcomes.

Sarcoma cancers are so rare, having an annual incidence of only 12,000 soft tissue cases and 3,000 bone cases in the U.S., that many people, even medical students, don’t readily recognize the word, said Justin Cates, M.D., Ph.D., a pathologist with Vanderbilt-Ingram Cancer Center (VICC). With years of experience observing sarcoma tissues in their myriad presentations, he is the final deciding expert in the diagnostic process at Vanderbilt.

“The reason diagnosis is difficult is most pathologists don’t see these tumors very often,” Cates said. “Pathology is a field of repetition. It is matter of volume. You need to see a number of cases.”

Treatments for sarcoma, which is more common in children, differ according to the many subtypes, but medical literature that spells out evidence-based protocols can be scarce simply because the cancer is so rare. Sarcoma is akin to an orphan disease because so few people have a direct connection to it, said Cates. Consequently, it receives little research funding compared to other cancers.

Billingsley had multiple tumors in his lungs in addition to the tumor in his lower back and hip bone that had been causing the hip pain. He underwent surgery as well as multiple rounds of chemotherapy and radiation. He has been in remission since June 15, 2011.

Bump on the shoulder

A 23-year-old U.S. Army platoon leader stationed at Fort Campbell noticed the bump on his shoulder in 2012.

“The army took an X-ray, an ultrasound and eventually an MRI,” said the man, who asked that his name not be used. “They weren’t sure what it was. They continued to monitor it. It continued to get a little bit bigger over the next several months. I had gotten a second bump by my collarbone. At that point, they shifted me on to Vanderbilt.”

He was diagnosed with rhabdomyosarcoma. When he heard sarcoma, he said he didn’t know what the word meant.

An uptick in new drugs and clinical trials for sarcoma

Vanderbilt-Ingram Cancer Center (VICC) has launched seven clinical trials for sarcoma drugs since 2015, with three of those opening up for participants as recently as August 2016.

“It was kind of shell shock at first,” he said.

He participated in a clinical trial, receiving intensive chemotherapy and radiation therapy.

“That started in mid-August,” he said. “In December, they did the surgery to remove the tumors. Then I underwent some reconstruction and a little bit of plastic surgery after that. They pieced my shoulder back together.”

“It really puts a perspective on your life and makes you appreciate life and not take things for granted,” he said, noting that he will never forget seeing children in Vanderbilt waiting rooms also contending with sarcoma.

“Sarcomas are often considered a child’s disease,” said Vicki Keedy, M.D., clinical director of sarcoma at VICC. “When I have patients who are 50 come to me, they say ‘I have done reading and my doctors told me this is a pediatric cancer. Why do I have it?’ That’s not necessarily true.”

Children are less likely to have the carcinomas that are linked to years of exposure, such as lung cancer with air pollutants, so sarcoma is more common in children than other types of cancer, Keedy explained.

Kelsey Towns, a member of the Father Ryan High School volleyball team in Nashville, had noticed a lump on her leg the summer before her senior year. She had it removed at Children’s Hospital on June 24, 2010.

“I went back to get my stitches taken out,” Towns said. “I was so excited to get them out. I was ready to play volleyball because we had an upcoming camp.” 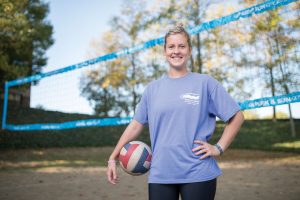 Kelsey Towns is playing volleyball again after her battle with synovial sarcoma. Photo by John Russell.

That’s when she learned she had synovial sarcoma. Towns dealt with the diagnosis by trying to not think about it and was initially reluctant to go to her appointments.

“Dr. B. (Borinstein) told my parents, ‘I’m not going to treat her unless I meet her.’ So I ended up coming,” she said. “We started chemo just a few days after that. Dr. B was such a blessing.”

He established a strong physician-patient connection, explaining what was ahead and stressing the importance of keeping a positive attitude. She went through chemotherapy and radiation treatment, followed by multiple surgeries, the last on Oct. 24, 2010.

Ginger Holt, M.D., an orthopaedic oncologist who specializes in sarcoma, was her surgeon. Portions of three muscles were removed during the second surgery, which also required an artery resection, Towns said. She then underwent additional chemotherapy. She has been in remission since.

While the survival rate for sarcoma can vary greatly depending upon the subtype and the location of the tumor, patients who receive an early diagnosis and are operated on by a surgeon who specializes in sarcoma have better odds of survival, Keedy said.

Pamela Goddard of Memphis was told her odds weren’t good.

In 2009, she went to an emergency room with chest pain. An X-ray showed a spot on one lung and then a PET scan revealed a tumor in her thigh and a spot on each lung. Doctors in Memphis quickly diagnosed Goddard with a very aggressive sarcoma that they believed had begun in her thigh and then spread to her lungs. She was told she probably had only weeks to live.

Goddard did some online research and learned that VICC was a sarcoma specialty center. With time being critical, just two days later she had an appointment at VICC with Holt.

Malpractice awards and settlements are eight times greater when physicians misdiagnose sarcoma than when they make other mistakes,

Holt and colleagues determined Goddard had been misdiagnosed and, in fact, didn’t have sarcoma. A biopsy confirmed that the mass in her thigh was a harmless fatty tumor. However, Vanderbilt physicians did diagnose Goddard with a very rare case of double synchronous primary lung adenocarcinoma with neuroendocrine features. Goddard is a six-year lung cancer survivor, which she credits to the care she received at Vanderbilt.

She now directs gifts from her family’s Goddard Foundation to VUMC for sarcoma research.

“People ask me why we donate to sarcoma research and not lung cancer,” Goddard said. “I tell them I am forever grateful to Dr. Ginger Holt for the correct diagnosis and the referral to the right doctors at Vanderbilt so I could receive excellent treatment for my lung cancer.”

“It was during the second round of chemo,” said Towns, an RN who works in the cardiac step down unit at VUMC. “I was sitting in my bed. I looked over at my mom and said this is what I want to do.”

After all of his hospitalizations, Billingsley said he initially tried to avoid anything medical. Now, he’s attending Belmont University with the eventual goal of becoming a nurse practitioner.

“My freshman year, I was going to be a business major,” he said. “I was only a year in remission, only 18 years old. I just had a good time. I was kind of lost. I really reached a low point. During that low, I did some praying and realized my true calling was to go into the medical field and return the favors that all the doctors and nurses did for me.”

Previous Post: An uptick in new drugs and clinical trials for sarcoma