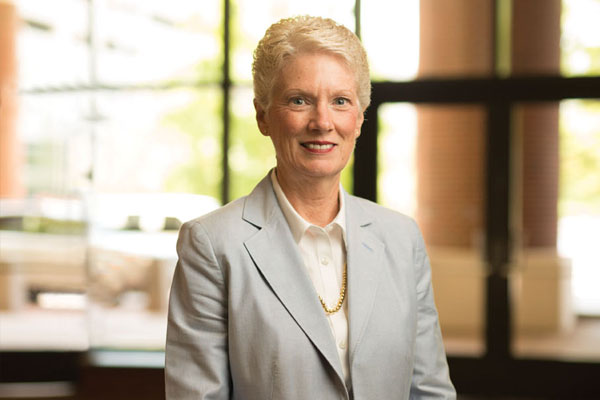 When Carol Eck, R.N., MBA, began her nursing career in 1976, she never envisioned she would serve in a leadership role at one of the top cancer centers in the nation. “I thought I would always be a bedside nurse, and I never thought I would work in oncology. But I can’t imagine being anywhere else,” she said, as she approached her August retirement. “These patients and their families have taught me more about life than any teacher, minister or family member. Working in this field has humbled me.”

During her 36 years at Vanderbilt University Medical Center (VUMC), with 30 of those years in administrative roles in oncology, she’s been an integral member of many teams that have shaped and improved facilities and services for cancer patients. Eck earned a well-deserved reputation among her peers as a tireless dynamo who made sure things got done right. She became the top-ranking nurse at Vanderbilt-Ingram Cancer Center (VICC), serving as associate nursing officer from 1997 to 2016.

“I’ve been blessed to have a lot of experience throughout the Medical Center, to have helped lead initiatives, and to have worked collaboratively with so many individuals,” said Eck. “It’s been remarkable to witness the growth though the years.”

This glimpse into some initiatives Eck has been a key part of over the past three decades illustrates how she has left a lasting mark.

1988: Move of oncology treatment into The Vanderbilt Clinic.

Eck worked closely with other members of the VUMC oncology team and architects to design dedicated clinical space for cancer treatment at The Vanderbilt Clinic (TVC). “One of the most exciting things for us was that we were going to have a separate infusion area. In our old clinic in the hospital, we had one big, open room with five chairs,” she said. “All we had were curtains to separate the chairs so there was little privacy. When we moved into TVC we had 10 private infusion rooms, and we thought it was the Taj Mahal. Well, in less than two years, we had already outgrown that.” Space was added. Moving the gynecological oncology service to TVC was also a crucial improvement, Eck said, as these cancer patients previously had to go to their appointments at the regular OB-GYN clinic.

When resident physicians’ hours were reduced by national mandate, VUMC administrators needed a staffing solution to maintain the highest level of patient care. Eck was an early advocate for having advanced practice nurses to fill that need, and she hired two nurse practitioners to work in stem cell transplant as primary care providers. The program now has 14 nurse practitioners, and the oncology patient care center has about 50. “The nurse practitioners have been an amazing addition,” Eck said. “We have to be realistic. We read that there’s a looming shortage of medical oncologists, but the problem is the number of people with cancer is growing and the number of persons living with cancer is growing. So, who is going to help take care of the patients? Nurse practitioners.”

Eck hired the nurses for all of the satellite outpatient oncology clinics as they opened. Cool Springs Oncology, the first off-site oncology clinic, opened in 2001. Green Hills Oncology opened in 2010 (this location has since closed due to facility re-allocation), NorthCrest Oncology in Springfield, Tennessee, opened in 2012, and Spring Hill Oncology opened in 2015. “It is so incredibly important to offer services to our patients close to where they live,” she said. “Watching this grow over the years has been incredibly rewarding. When I go out to visit NorthCrest and I talk to patients, they always say, ‘I’m so glad I don’t have to drive into Nashville for treatment.’”

Eck was part of a team lead by Friedrich Schuening, M.D., which opened the Outpatient Stem Cell Transplant Unit at TVC to greatly reduce the time spent in the hospital and procedure cost for patients. “There was such a collaborative approach to designing the center and coming up with the policies and procedures,” Eck said. “We had to develop a new process for evaluating patients to determine who should get an outpatient transplant, as opposed to having it inpatient.”

2012: Opening of the myelosuppression unit

The 10th floor of the Critical Care Tower at Vanderbilt University Hospital was opened as a specialized unit for immunocompromised patients, including stem cell transplant patients, increasing available beds from 27 previously housed on 11 North to 34 beds on the new unit. “We had physicians, nurses, social workers, case managers, nurse practitioners—the whole care team—participating in the unit’s design,” Eck remembered. Patients stay on the unit as long as a month or more, so their comfort was critical to the team. She is proud of the larger patient rooms, as well as showers and laundry facilities on the floor for the patients’ caregivers.

After the specialized unit for myelosuppression and stem cell transplant patients opened in the Critical Care Tower, Eck worked alongside other oncology leaders and architects to upgrade the vacated space in 11 North into a 27-bed hematology/oncology unit. “Having those patients together with nurses specially trained to provide their care is invaluable for both the patients and their medical providers,” Eck said. And this unit and the myelosuppression/stem cell transplant unit have become like family for their patients, said Eck. “At holiday times, the staff brings in food for potluck meals. They do this on all of the holidays—not just Thanksgiving and Christmas. That way, these families and patients don’t miss out on special celebrations. This has become an important tradition.”

In her last weeks before retirement, Eck worked with a team examining the feasibility of opening a seven-day-a-week oncology clinic to help keep patients out of emergency rooms when they need symptom management after regular clinic hours.