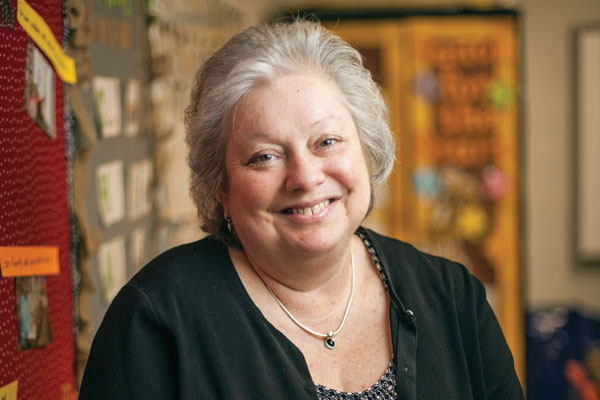 Myth: Ovarian cancer does not have symptoms.

Cheri Barrow knows this all too well. In 2007, after months of struggling with severe bloating, reduced appetite, lower pelvic pain and hot flashes, the Elkton, Ky., school teacher went to the doctor and was diagnosed with ovarian cancer. She is currently on her fifth course of treatment.

There is no cure. The potential for relapse is high.

According to the American Cancer Society’s 2014 report, there will be an estimated 21,980 new cases of ovarian cancer and 14,270 estimated deaths. It alternates between the fifth and sixth spot for cause of cancer deaths among women in the U.S. and is the leading cause of death from gynecological cancers.

“I am very aware of what is ahead,” said Barrow, 52. “I just take one treatment at a time. If one drug doesn’t work, then we will move on and try something else. I don’t dwell on what is in the past and I don’t want to overthink things. I know that someone has to be in the percentage of people who a drug works for.”

Marta Crispens, M.D., FACOG, associate professor and director of the Division of Gynecologic Oncology at Vanderbilt-Ingram Cancer Center, describes her relationship with Barrow and other patients undergoing treatment for ovarian cancer like guiding them on a journey.

“I am the guide who is helping them walk down this path. My goal is to give them hope that the path will be as smooth, easy and long as possible. We all know where the path is going to end. There are beautiful things that will happen along the way … things they otherwise would not have been able to experience with their families and for themselves. I think that is hope.”

Often when women experience bloating, gastrointestinal issues like reflux, lower pelvic pain, an increased waistline despite a reduced appetite, and a change in bowel and bladder habits, the symptoms are attributed to a variety of diagnoses including menopause and irritable bowel syndrome, not ovarian cancer, Crispens said.

When the NCAA Women’s Final Four came to Nashville in April, it brought great basketball action, plus extra support for ovarian cancer.

Because there is no effective screening for early detection of ovarian cancer, Crispens said the need for ovarian cancer awareness is urgent. Patient awareness of symptoms is not high and research dollars are more scarce.

“Most cases are not diagnosed until they are at an advanced stage,” said Crispens. “That is partially because there is no screening and because the cancer spreads almost from inception. This information is particularly important for women around the time of menopause and those with a personal or family history of breast cancer.

“We know that we will be able to get 75 percent of patients who present with advanced stage disease into remission,” said Crispens. “But remission doesn’t mean cure. Most of those patients are going to eventually have their cancer recur.

“And we are going to treat those patients with a series of chemotherapy agents in the hopes of keeping their cancer under control for as long as possible and maximize the duration and quality of their life.

“The goal is to try to make this a chronic disease for as long as we can.”

Six years ago when Barrow began her treatment, she was placed in a clinical trial. That cocktail of chemotherapy drugs kept her in remission for three years. Since then, she has tried a variety of therapies. In March, she had a scan with ambiguous results, and after consulting with Crispens, is trying the drug Taxol again, taking it daily for three weeks and then having a week off. Crispens said some patients respond well to this daily regimen and Barrow is hopeful.

Ovarian cancer encompasses several types of cancers—epithelial, fallopian and primary peritoneal—all considered to be one disease and treated in the same fashion. The most common form is serous carcinoma that arises mostly from the tubal lining.

“There is hope in the effectiveness of the aggressive initial treatment,” said Dineo Khabele, M.D., FACOG, assistant professor of OB-GYN and Cancer Biology and director of Gynecologic Oncology Translational Research. “The advancements have been significant in extending how long people live with advanced stage ovarian cancer.

“The problem is that ultimately most women will end up succumbing, so we have to do better. It is not sufficient to push the boundaries of how long people are living with ovarian cancer. Ideally we want to make sure we change the mortality rate.”

That is where research comes in. Khabele is looking at the genetic alterations in the tumors and possible targets for treatments.

“We are trying to re-sensitize these tumors to a therapy that we know works. So we are looking at molecular targets,” she said. “We are also looking for certain protein targets that we could use to help identify and diagnose ovarian cancer with imaging. This is very early in the stage of development but it would use radiotracer imaging instead of a CT scan.” 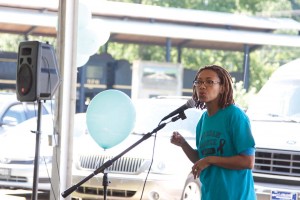 The ovarian cancer team at VICC is active in the community to raise awareness of the disease’s symptoms and generate more research support. Here, Dineo Khabele, M.D., speaks about the early symptoms of ovarian cancer at Elaine’s Walk in September 2013, an event organized by MillarRich, L.L.C. Photo by Joanna Mechan.

Although Vanderbilt is not at the point of being able to provide personalized medicine for patients with ovarian cancer, Khabele and Crispens feel that the care they provide is “a very personalized approach.”

“We have to individualize a person’s care to their specific situation,” said Crispens. “We also reiterate how important it is for them to ask questions because we want them to have as much information as possible. With individualization in care, we are able to optimize the care to work around the factors in their lives.”

Being able to return to work the day after treatment is important to Barrow. Her team has designed treatments that not only allow her to work but allow her to function on a day-to-day basis.

“She has a life outside of her treatment,” said Khabele. “Balancing a patient’s life and her treatment regimen is vital. We don’t want to impair a patient in a way that she is not able to fulfill her goals. Quality of life is crucial.”

“Teaching is part of Cheri’s identity,” said Crispens. “Providing a treatment that allows her to function as a teacher is essential to her both emotionally and socially. That is part of the personalization process.”

And for that Barrow is very thankful.

Since 1990 she has been a teacher at North Todd Elementary School, a job she loves and one she says keeps her motivated.

“Teaching consumes me,” she said smiling through tears. “It’s all about making more memories and making a difference. I want to make an impact on others.

“With teaching, it is something different every single day. You just never know what to expect.”

She said it is the same in her cancer journey.

“You just don’t know, but I have a lot of faith and that gives me hope,” she said. “I am willing to undergo treatments for as long as I can tolerate it. If the drugs don’t help me, if the research doesn’t help me, then it might help other people later.

“I have lived six years since I was diagnosed. Who knows? It could be another six or even more.

“I have faith in my health care team. I know that they are following the best path for me.”