Susan Hahn is moving again – into a new home and into a new stage of life after cancer.

The Chicago native had moved to Nashville in January 2009. She was engaged by that July and quickly began planning a big wedding. She and her fiancé had also just begun plans to tear down and rebuild his house, when “three weeks later, BAM, I was diagnosed with breast cancer,” Hahn says. “It was all so surreal – and seemed unreal.”

The ensuing events progressed quickly. Just ten days after diagnosis, she had a right-side mastectomy and 13 lymph nodes removed. A month after surgery, she and Mark were married. A couple of days after that, they moved into a rental house in anticipation of building their new home. A mere ten days after the wedding, Hahn started chemotherapy. During chemotherapy, she also prepared for reconstructive surgery with a tissue expander.

The barrage of treatments – coupled with the rapid succession of other major changes in her life – took a toll on her physically and emotionally. Even though the treatments were harsh, they were straightforward. But after the treatments ended, Hahn says she realized “recovery was a harder thing to navigate than I thought it would be.

“All those changes – moving, new job, new city, breast cancer, new marriage, building a house – it was all pretty stressful,” she says. “Along with the anxiety of constantly wondering ‘am I really well?’”

A friend (and fellow cancer survivor) had suggested that she look into programs offered by the Vanderbilt Center for Integrative Health (VCIH) – a multidisciplinary healing center that combines traditional and complementary therapies with the goal of caring for the “whole” patient: body, mind and spirit. 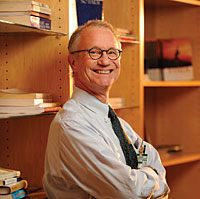 Roy Elam, M.D., (left) medical director of the Vanderbilt Center for Integrative Health, says integrative health programs can improve quality of life and help cancer patients deal with the stress and emotional response to their illness. (Photo by Joe Howell)

Hahn brought up the idea to her oncologist, who gave her enthusiastic approval.

After her initial consultation with the center’s medical director Roy Elam, M.D., Hahn began yoga in hopes of regaining strength and improving her mobility before her reconstructive surgery.

“Not only was it painful, but when you have some new apparatus in your body, it freaks you out a little bit thinking you’re going to rip it,” Hahn says.

But the gentle yoga practice, she said, “really addressed my fears of stretching certain ways.”

The benefits, however, went beyond addressing her physical pain and mobility.

“When you start moving your body in a place where you just lost a breast or something, it’s emotionally painful as well,” she says. “And (VCIH) is the place you want to be when you’re dealing with whatever your emotional pain is.”

Hahn has since sampled nearly all of the programs offered by VCIH – qigong, nutrition classes, counseling, massage therapy and mindfulness-based stress reduction.

“I was so fragile in the beginning, but I didn’t want to stop moving. I wanted to climb back into my body, and this is the way to do it.”

This time of transition – after the chaotic torrent of surgeries, chemotherapy and other cancer treatments ends and the “life after cancer” phase begins – is difficult for many cancer survivors.

“That moment when the treatment stops it can feel like falling off a cliff,” describes Rachel Mitchell, yoga instructor at VCIH. In addition to the physical limitations and fatigue that result from cancer treatment, the experience can also affect patients’ relationships with family members and at work.

“That’s when some of the emotional fallout can hit,” she says. And there’s actually a lot more healing and recovery that needs to happen at that point.” 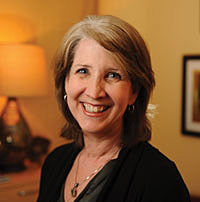 Pearce says people come to the center trying to figure out how to make sense of their experiences and move forward.

“Often they are very motivated to move forward into a more healthy lifestyle, to take care of themselves and their family in a different way,” she notes. “So that’s a nice time for us to be seeing them and …to offer them things to help them move forward in their recovery, whatever that might mean for them.”

The programs, says Elam, “focus on caring for the whole person…and on empowering people to take care of their own health.”

Elam points out that the programs are meant to “complement,” not replace, a patient’s traditional medical treatments by offering therapies to improve their quality of life. The center does not practice “alternative” medicine – so there are no crystals, no herbal concoctions, no magic spells.

The role of integrative medicine in cancer care is not to prolong the patient’s life, “although it is a wonderful thing if that occurs,” says Elam, who is also an internal medicine physician.

“Our role for cancer patients is to enhance the quality of their life, and especially to deal with the stress and emotional response to their illness.”

Some of the questions that may race through a patient’s mind after a cancer diagnosis – questions like: “Did I do something to cause this?” “Why didn’t I see this coming?” “What will happen next?” “How long do I have?” – can keep the attention on the past and future and cause tremendous fear and anxiety.

A central strategy in integrative health is to calmly refocus one’s attention on the present – a concept known as “mindfulness.”
Pearce describes mindfulness as “a compassionate way of accepting where we are before we can move someplace else.” 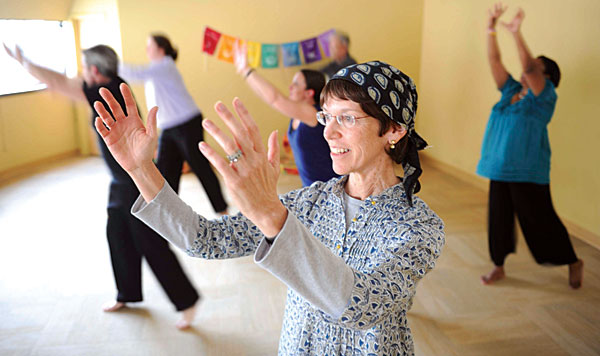 Breast cancer survivor and qigong instructor Kathy Woods says that qigong has helped her feel “more at home and appreciative of this embodied life than I was before I had cancer.” (Photo by Joe Howell)

“Mindfulness is central to the approach that we take with all the types of therapies we do here…because it is so evidence-based – evidence that it is effective in reducing stress, enhancing the immune system, enhancing psychological well-being,” says Pearce.

Mindfulness is a key component of qigong (pronounced “chee-gung”), a Chinese martial art that emphasizes synchronized breathing and physical movement with awareness and “moving meditation.”

Yoga had traditionally been the movement practice paired with the sitting meditation in such programs.

“We enjoyed teaching yoga, but we found that a lot of people who came to take our class found the yoga more challenging than we wanted the experience to be for them. But we found that qigong was such an accessible movement practice – everybody could do qigong,” says Woods.

When diagnosed with breast cancer in 2001, Woods decided to retire from her post as head of the “lower” (elementary) school at the University School Nashville and focus on getting herself well, which included learning more about mindfulness and qigong. Eventually she began teaching MBSR classes with her husband and offering qigong as a component of the class. Then, in 2006, Woods began teaching a qigong class for breast cancer survivors at Dayani, which has now expanded beyond breast cancer patients and is open to anyone.

“I’ve had students in my class at Dayani who do parts of the practice sitting in a chair, and I think they still get the benefits.”

The gentle, choreographed movements of qigong are similar to those of tai chi. But qigong is often easier to learn, Woods says, and therefore, more accessible and appropriate for someone recovering from an illness like cancer.

From personal experience and her observations as a qigong instructor, Woods notes that qigong and related therapeutic movement practices can be a particular help to cancer survivors. 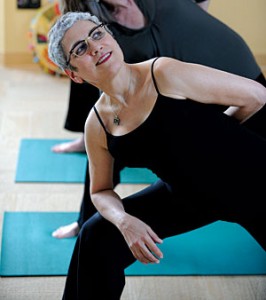 Research at Vanderbilt-Ingram is hoping to identify ways to help survivors like Adrien MacKenzie "thrive." Click photo to read more about the program.

The slow, flowing movements of qigong can help strengthen the legs and upper back and help with maintaining and enlarging range of motion, she says.

Qigong can also provide tools to deal with stress that can be applied outside of class. Each exhale, Woods says, is an opportunity to experience relaxation.

During class, Woods asks students to notice how the energizing effects of holding the arms up overhead dissipate as the arms are lowered, and to experience the peace and stillness of that moment.

“The idea of settling yourself in the stillness as if it were the rest in a line of music…if you can really practice that oscillation (between activation and relaxation), it becomes much more accessible.”

Hahn says the stress-relieving strategies she learned in qigong class at VCIH got her through an anxiety attack during a recent root canal.

“I closed my eyes and I visualized Michelle (Pearce), and I did some of her qigong and breathing to bring my heart rate down. It really helped,” Hahn says. “Though the endodontist might have thought I was a little crazy!”

But beyond the physical benefits, such practices can help a cancer survivor begin to feel “at home” in this new body that may have been altered by cancer treatments.

“I found that mindfulness – but in particular qigong – has made me feel more at home and appreciative of this embodied life than I was before I had cancer,” says Woods.

“I think there’s a kind of grace inherent in the practice that reminds you that this life is something to be grateful for every day.”

Less than two years past her cancer diagnosis, Hahn is getting back to something resembling life “before cancer.” She’s been able to step up her physical activity, returning to higher intensity yoga classes, working out with a personal trainer at the YMCA, and hiking a 5.8-mile trail at Percy Warner Park once a week.

She still makes time every month for massage therapy and counseling and has been able to integrate what she learned from the other programs into her daily life. 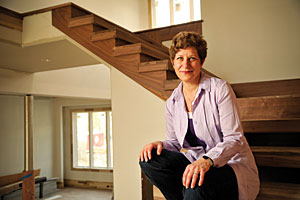 Susan Hahn credits integrative health programs like yoga and qigong for helping her “climb back” in her body after a breast cancer diagnosis. (Photo by John Russell)

“I’m actually doing well, I feel energized enough to work full time and keep my life up and running while I try to work out every day and transition to a new house.”

Most of all, she’s beginning to reclaim her identity, no longer wanting or needing to identify as “the cancer girl.”

“I didn’t want my life to be all about cancer. I wanted it to be about health and recovery,” she says. “(VCIH) is not all about cancer, and that’s what I like about it. That’s why I’m still going. You don’t want to be constantly reminded that you’re the cancer girl; I’m just another person looking for better health.”

As she and her husband now prepare to move into their new home, Hahn recalls proclaiming to her architect as they were designing the house: “When this house is built, I will be well.”

Even though the house isn’t finished yet, Hahn sees the beauty in it just as it is today – acceptance that she carries into her perspective of life after cancer.