Every year on Aug. 20, Janet Greene bakes a special cake to celebrate her son Michael’s birthday. It’s a chocolate cake recipe that Michael concocted when he was a Cub Scout for a father-son cake baking contest.

On his last birthday, Michael would have turned 33.

“He was a quiet, hard-working, kind, generous, courageous guy,” Greene says of Michael, who died at age 16 from a glioblastoma – the most rapidly fatal form of brain cancer. 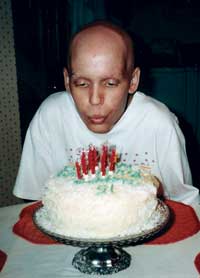 After three months of chemotherapy for glioblastoma, Michael Greene blows out the candles on his custom birthday cake to celebrate his 15th birthday on Aug 20, 1993.

In the nearly 20 years since Michael started the treatments that ultimately failed him, only incremental progress has been made in treating glioblastomas. There’s no cure.

Janet and David Greene believe the best hope for finding solutions and cures for brain cancer lies in research. Since 2004, they have funded a discovery grant in brain tumor research at Vanderbilt University.

“We know that we have to take risks in science, and sometimes those risks have great reward,” says Thompson, who also directs the Vanderbilt Brain Tumor Center at the Vanderbilt-Ingram Cancer Center. “The Discovery Grants support the most creative research ideas – to nurture those ideas and help them blossom.”

This kind of support is especially important for areas of research that focus on less common diseases like brain tumors, Thompson adds.

A chord of fear

Primary brain tumors are tumors that begin in brain tissue (in contrast to metastatic brain tumors, which start elsewhere in the body and spread to the brain). There are more than 20 different types of primary brain tumors; many of them grow from glial cells, the supporting cells of the brain, and are called gliomas.

The spectrum of primary brain tumors ranges from benign tumors to more slowly growing gliomas to the aggressive, highly invasive and malignant glioblastomas.

About 22,300 new cases of primary malignant brain tumors will be diagnosed in the United States this year, according to the National Cancer Institute. Of these cases, some 2,300 will be new cases of childhood primary brain tumors.

More than 13,000 people in the United States will die this year from primary brain cancers.

“A brain tumor is probably one of the worst kinds of disease many patients and their families can imagine,” Thompson says. “It strikes a chord of fear.”

Because brain tumors grow inside the confined space of the skull, they push aside (compress) normal brain tissue. This can cause pressure to build inside the skull and can lead to symptoms including headaches, seizures, problems balancing or walking, and changes in speech, vision or hearing. Brain tumors also can cause changes in thought, memory, mood and personality.

While patients with low-grade gliomas can have good outcomes following treatment and survive for many years – even decades – patients with glioblastomas face a median survival of a little more than one year, and few patients live for five years.

Michael Greene – trumpet player, strikeout pitcher and exceptional student – was nearing the end of his freshman year in high school in 1993. Getting into the car one afternoon, he lunged to the side and vomited.

He had complained about feeling dizzy for a couple of days, but his parents weren’t overly concerned, recalls Janet Greene.

“We took him to the pediatrician, and sensing whatever he sensed, he sent Michael for an MRI,” she says.

The MRI revealed a tumor in the pons (part of the brainstem), and further tests confirmed it was a glioblastoma. Because of the tumor’s location in the brainstem – which controls breathing and heart function, and through which all brain-to-body nerve traffic passes – surgical removal was not an option.

The neurosurgeon at the Knoxville hospital was blunt.

Michael was 14 and a freshman at Farragut High School (in Knoxville, Tenn.) when diagnosed with glioblastoma multiforme.

“He told us there was no cure, and that Michael would be dead in 6 months,” David Greene recalls.

“I told Michael that he was young and healthy, and it was crappy, and we would deal with it, and he would be one of the survivors,” Janet Greene says. “I had no clue.”

The Greenes headed to Vanderbilt to seek a second opinion from Mark Jennings, M.D., and they had Michael’s records sent to five other centers for evaluation.

“Dr. Jennings gave us the same message we’d heard in Knoxville, but he used different words, a different tone,” Janet Greene says. “He said, ‘There’s always hope,’ and we thought, this is the place we need to be.”

At Vanderbilt, Michael had multiple inpatient courses of a four-drug chemotherapy cocktail, followed by seven weeks of twice-a-day radiation therapy in Knoxville. He worked with homebound tutors to keep up with his schoolwork, visited with his band friends during lunchtime, and never complained, Janet Greene says.

“He was remarkable. He gave it everything he had, and he was always kind and brave and dignified,” she says.

The treatments held the tumor in check for about 10 months.

When his disease progressed, Michael entered a clinical trial of the experimental chemotherapy drug temozolomide at the Children’s National Medical Center in Washington, D.C. The drug was approved in 1999 (brand name Temodar) and is now a standard treatment for glioblastomas.

Temozolomide “was amazing,” David Greene says. “Michael went from a wheelchair to walking 2 miles in the Knoxville Expo race. But it didn’t last.”

New treatments on the horizon

Vanderbilt physicians use a team approach to plan treatment for brain tumors. Every week, a group including representatives from neurosurgery, radiation oncology, neurology, medical oncology and neuropathology meets to discuss new patients and patients under treatment.

While technical advances have improved neurosurgery and radiation therapy – helping to avoid collateral damage to normal brain structures – the overall picture for treatment of the most aggressive brain cancers has changed remarkably little over the last few decades, Moots says.

“Radiation therapy is by far the strongest and most effective treatment after surgery for most primary brain tumors,” Moots says. “And although the delivery of radiation has changed a lot in the last decades, the total dose and how effective it is at killing tumor cells and controlling tumors is not much different.”

On the chemotherapy front, Temodar was the first new treatment approved for gliomas in 20 to 30 years, Moots says. In 2009, the drug Avastin was approved for treating glioblastomas, and targeted therapies that block the signaling pathways that drive certain brain tumors are on the horizon.

Immunotherapy – a “vaccine” approach that activates a patient’s own immune cells to recognize and destroy cancer cells – is also showing progress, Moots says. In early trials, the immunotherapy DCVax extended median survival of patients with newly diagnosed glioblastomas to three years, and 27 percent of patients had survived six years or longer. Vanderbilt plans to participate in larger Phase III clinical trials to assess the effectiveness and side effects of DCVax.

“The pace of progress is never fast enough, but after a period where treatment advances came decades apart, I think now we’re realistically looking year by year at new treatment options,” Moots says.

Basic science and pre-clinical studies are the drivers of these new therapeutic possibilities, Thompson says.

“There have been some fundamental scientific insights into brain tumors – their basic biology, what drives them, what might be a cell of origin – and those insights are leading to completely new ways to imagine treatment. That’s exciting,” Thompson says.

For example, within the last five years, scientists have recognized that neural stem cells – cells that can renew themselves and divide and become all the cell types of the brain – may, if altered, become brain cancer stem cells. 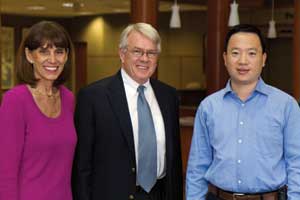 These cancer stem cells can be isolated from a patient’s tumor, and as few as 100 of them – implanted into an animal – will grow to form a tumor that looks the same as the patient’s tumor.

With support from the Greenes’ discovery grant in brain tumor research, Jialiang Wang, Ph.D., assistant professor of Neurological Surgery and Cancer Biology, is studying these brain cancer stem cells and the signaling pathways that drive them.

He learned that the stem cells are resistant to radiation and that a particular molecular pathway (Notch signaling) contributes to this resistance. Then he discovered that blocking the Notch pathway makes the cells sensitive to radiation therapy – suggesting a new therapeutic approach.

The ultimate goal, Thompson says, would be to prevent brain tumors in the first place, “but first we have to understand who is at risk and what’s putting them at risk.” To that end, Thompson and colleagues are conducting a large epidemiological study of brain cancers to identify genetic and environmental risk factors. Their findings could lead to brain cancer prevention strategies.

“If we can’t prevent a brain tumor though, there could be a role for surgery if it can be safely removed, and what we’d really like to have is a therapy that just flips a switch and shuts it off so it never comes back,” Thompson says. “A lot of people are passionately focused on solving this problem. And the way that will happen is through research.”

Janet and David Greene agree. They know that Michael did his part, and they are doing their part. They know that someday doctors and scientists will find a way to beat this disease. And on that day, they say, “Michael will smile.”

Read more about how research is addressing life “After Brain Cancer.”