As a clinical trials nurse Wendy Cooper, B.S.N., R.N., has a ringside seat to the bench-to-bedside progress of cancer research.

“We have brilliant minds who work on one pathway or one piece of the puzzle for their entire career,” said Cooper, the assistant director of clinical research operations for the Clinical Trials Shared Resource (CTSR) at Vanderbilt-Ingram Cancer Center.

While it can take years or decades for basic research to impact cancer treatment, she noted, “over the course of time, one idea can lead to tremendous outcomes and advances.” 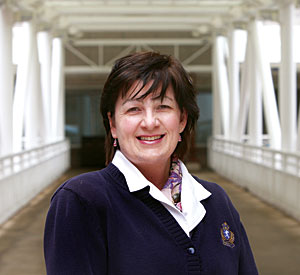 It’s those ideas that lead to clinical trials, which in turn lead to new treatments as well as detection and diagnostic tools for cancer.

Seeing that progress reinforced her decision to become an oncology nurse, which was a career path that came easily for Cooper.

From an early age she was fascinated with hospitals, science and medicine. In school, she seemed to naturally excel in the sciences. And a fictional physician, Dr. Joe Gannon from the TV show “Medical Center,” was also an early inspiration.

“He was always this real problem-solver. He always did the right thing and it was always dramatic, like life or death,” she said.

She counted down the days until she could serve as a candy striper at her hometown hospital in Ottawa, Ontario. She graduated from the University of Ottawa Health Sciences Center with a Bachelor of Science in Nursing in 1983. After working as a new grad in the float pool for six months, she accepted the only full-time position available – on the oncology floor.

“Working with oncology patients,” she said pausing, “is an education all in itself.”

“It’s like going to the university of life. If you thought you had your priorities in order, all you had to do was work with patients in these situations to learn what was important in life.”

She came to Vanderbilt in 2001 to work in the CTSR as a research nurse on the Phase 1 team, which coordinates Phase 1 clinical trials – the first stage in drug testing to check for safety, dosing and toxicity in humans.

While Cooper had some experience with oncology research in previous jobs, she credits Mace Rothenberg M.D., who was head of the Phase I program at Vanderbilt at the time, with really teaching her about clinical trials and the value of a well-written protocol.

“If the protocol is written poorly, you can often get it rewritten before placing patients on the study,” said Cooper. “So the trial runs more smoothly, the data are cleaner, and – the best part – the patients reap the benefits.”

Ultimately, clinical trials determine the efficacy of a treatment as well as its survival benefits. Clinical trials research nurses screen, consent and follow patients, and serve as the patient’s primary nurse during a study.

Cooper has held various leadership roles at Vanderbilt – including coordinator at the Scientific Review Committee (SRC), Group Leader for the Thoracic, Sarcoma, Neurologic and Radiation Oncology teams, and manager over all disease site teams.

In her current post, her goal is to be a resource to her staff while focusing on patient safety and protocol adherence.

“The work we are doing is extremely important, not only to patients we currently serve but for the many who will come after them,” she said.

She marvels at the medical progress she has seen in her role, for example, seeing personalized medicine begin to impact patient care.

“If you stand back and look at what has happened over the last 10, 12 or 20 years, you begin to have those big picture moments. It’s what drives me to come to work every day – to be a part of that.”