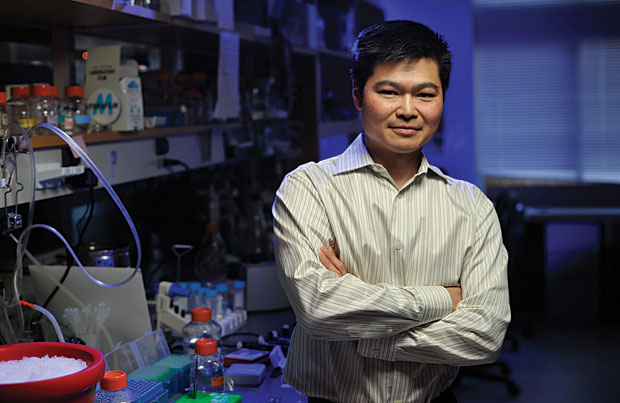 When the United States declared a “War on Cancer” 40 years ago, the endeavor was envisioned as a strategic battle, with doctors and researchers employing overwhelming force and lethal technology in a straightforward march to victory against a disease that claimed millions of lives.

Scientists have made progress in the ensuing years, yet the enemy remains a mysterious foe, in part, because cancer cells can be so devious. They grow and multiply in a dangerous rush or smolder quietly for years before striking their victims.

Chemotherapy is often the weapon-of-choice in the battle to kill these deadly invaders. Designed to poison all fast-growing cells, including cancer cells, the chemotherapy may appear to be working but, all too often, a few cancer cells manage to escape and return to attack the patient.

Puck Ohi is a young cancer investigator with promising ideas about how to find a cancer cell’s weakness. At this early stage in his career, he has received some government grant funding to support his research laboratory but there are no additional research dollars to pursue his latest theories about how to attack cancer cells.

However, Ohi is exactly the kind of innovative cancer investigator that a group of new cancer fighters, Vanderbilt-Ingram’s Young Ambassadors, has decided to support through philanthropic efforts. The Young Ambassadors is a group of young professionals who joined forces in 2009 to raise money in support of cancer discovery efforts.

The group awarded Ohi the first Young Ambassadors Discovery Grant to help jump-start one of his research projects.

“Each of us is passionate about supporting Vanderbilt-Ingram. This is where new science is being created. While cancer is devastating, it is empowering to join the fight in a meaningful way,” said Emily Blake (EB) Jackson, who co-chairs the Young Ambassadors with her husband, Todd.

Some of the Young Ambassadors who raised funds for the Discovery Grant were (from top): Kate (left) and Carrie Steinbeck (right) with mom, Martha; Nathan and Hannah Dudney (photo by Ann-Marie Hensley); and Todd and EB Jackson.

There are now 21 of these young cancer fighters who are tapping their family, work and social networks to raise money for cancer research.

EB and Todd Jackson were among the founding members of the philanthropic group. Like others in the organization, fighting cancer is a personal mission for the Jacksons. Todd and his parents are cancer survivors and three of EB’s grandparents have battled the disease. Brain, lung, prostate, breast, skin, esophageal and colon cancers are all represented in their family.

When fighting a common enemy, there is strength in numbers.

So the Jacksons reached out to other young professionals with their own cancer stories – people like sisters Carrie and Kate Steinbeck, who joined the Young Ambassadors because of the care their father received at Vanderbilt-Ingram while he was being treated for lung cancer.

“We never felt like our father was just another patient and the team at Vanderbilt eased our minds,” said Carrie Steinbeck.

“We knew Dad was getting the most advantageous treatments and they were doing the best they could for our family. That made Kate and I want to get involved in not just helping with cancer research but also the Vanderbilt group itself.”

The Young Ambassadors raised $41,000 in the first round of fundraising, exceeding their goal of $35,000 slated for the first Discovery Grant. Personal contacts – phone calls, conversations and letters – generated the most fundraising dollars, but the group also turned to social media like Facebook and Twitter to raise awareness.

“We want to get more people our age active in the fight and what better way to reach them than via Twitter, Facebook and email?” explained Carrie Steinbeck.

The Steinbecks also sent out postcards and emails with their father’s photo to the network of family and friends who had followed his cancer journey prior to his death.

The Young Ambassadors philanthropic model was built on a “scientist-lay person” partnership. Once the fundraising was in place, the Young Ambassadors turned to Jennifer Pietenpol, Ph.D., director of Vanderbilt-Ingram, and Scott Hiebert, Ph.D., associate director for Basic Research, to help create a selection process for the grants. Cancer Center leaders chose a group of investigators with innovative research ideas, and then the Young Ambassadors developed a set of criteria to score each presenter.

“By collaborating closely with Vanderbilt-Ingram leadership, we knew the projects we were considering were scientifically sound and innovative,” said Todd Jackson.

“As lay people, we had a different set of criteria. If the most brilliant person in the world can’t communicate an idea well, he or she is less likely to be funded by non-scientists, so we evaluated each presenter’s ability to communicate their concepts to potential lay funders.”

Kif18A, the protein at the center of Ryoma Ohi’s Discovery Grant, is normally involved in getting chromosomes (in red) properly positioned for cell division to take place. (movie courtesy of Sophia Gayek/Ohi lab)

Ohi was excited to be chosen.

Ohi’s proposal focuses on a protein (called Kif18A) that cancer cells need to divide – but normal human cells don’t require. In the absence of this protein, cancer cells stop dividing and die.

That makes it an attractive target for the development of new chemotherapeutic agents.

Kif18A’s role during the process of cell division (mitosis) is influencing the movement of chromosomes within the dividing cell.

“What we’d like to do with the Discovery Grant is to…define the molecular underpinnings of this cancer cell-specific weakness and further explore whether Kif18A represents a good drug target,” Ohi said.

Ohi hopes that the research supported by the Discovery Grant will lead to a larger government or foundation grant. 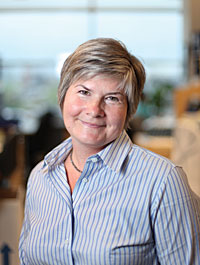 Stacey Huppert, Ph.D., received matching funds from the Vanderbilt-Ingram Board of Overseers to support her search for compounds that target Notch, a gene that drives many cancers and is a promising therapeutic target. (Photo by Susan Urmy)

Stacey Huppert, Ph.D., assistant professor of Cell and Developmental Biology, received the $20,000 Discovery Grant for her proposal to study the Notch gene, which holds promise as a therapeutic tool for many forms of cancer.

“These are new researchers coming in with passion and vision and they may be the ones to develop a new cure for cancer,” said Kate Steinbeck.

“It was the promise and excitement of cutting edge research that drew us to the work of Ohi and Huppert,” Nathan Dudney said.

“Their passion for scientific discovery mirrored the determination of our loved ones who battled cancer and our own desire to shape the future of research through venture philanthropy.”

“We are investing in the future.”