VICC Momentum >&nbspWords to Live By

Words to Live By 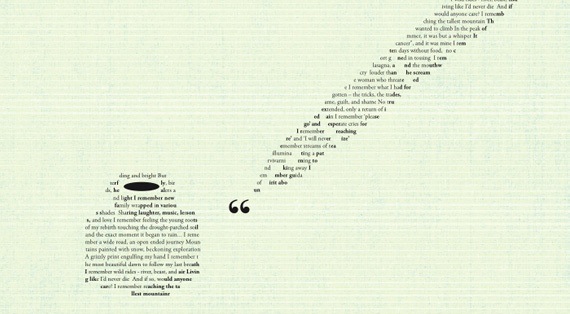 Fingers speeding across a keyboard, Sigourney Cheek watched letters appear on the computer screen as she composed an electronic message that would mark a new chapter in her life. Pausing to find the right words, Cheek wondered if an e-mail was the proper way to tell close friends that she had just been diagnosed with cancer. E-mails are usually business-like, to the point, without emotion.

This intensely personal message would be far different.

The Nashville philanthropist and community leader had always been known as a dynamo. Over the years, she had served as chairman of the board at Cheekwood, a botanic garden and art museum established by the Cheek family. She was co-founder of Nashville’s Antique and Garden Show, board member of the YWCA and Magdalene House and had served as co-chair of the Swan Ball, a glittering fundraiser for Cheekwood.

Now Cheek, 59, was adding the title “cancer patient” to her resume. She had made the first “I have cancer” phone call to her closest friend and found the process exhausting. So she decided to compose an e-mail to 17 friends to let them know what was happening.

“I like to write and I didn’t want them to hear about it from other people,” Cheek remembered. She had no idea that when she hit “send,” her friends would forward the message to other people who cared about her well-being. Like a pebble dropped in a pond, the waves from that first message continued to ripple outward.

Messages were soon pouring in from new people who wanted to be added to Cheek’s e-mail list. Every month, as she sent out the “Siggy updates” on her health, the list grew, expanding the circle of friendship and bringing hundreds of new people into her life.

For the next five years, while undergoing treatment at Vanderbilt-Ingram Cancer Center (VICC), Cheek chronicled her journey with chronic lymphocytic leukemia (CLL) through these e-mail updates. What started as a simple message to friends eventually led to the publication of her book, “Patient Siggy,” an account of her life before and after a cancer diagnosis. 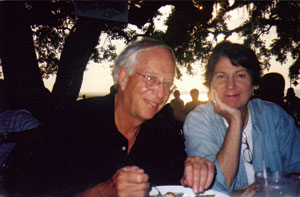 Jim and Sigourney Cheek enjoying dinner at their favorite waterside restaurant in Ponte Vedra, Fla., in May 2005, just before a chemotherapy treatment.

That interchange of ideas and hope served as a form of therapy, according to Sigourney’s husband, Jim.

“So many people wrote her back inspiring messages about how much her story, her approach to her illness and her hope and courage influenced their own ability to meet the challenges of their own situations,” said Jim Cheek. “I think she gained so much from that emotionally and psychologically.”

The idea that writing is physically and psychologically beneficial for cancer patients and individuals who have lived through traumatic events isn’t just a vague hope. There is science to support the concept. Over the last 25 years, numerous research studies have demonstrated the physical and emotional benefits of expressive writing, including improved immune system function, reduced blood pressure, fewer stress-related visits to the doctor and improved mood.

Other studies reveal that some cancer patients report better physical health and less pain after participating in expressive writing programs.

To help cancer patients and their families cope with the stresses of a cancer diagnosis, VICC’s Reach for Survivorship Program has launched a series of creative writing classes. The free workshops are open to every cancer patient during or after treatment, even if they are not Vanderbilt patients. The program provides participants an opportunity to explore creative writing in a non-threatening environment. The classes are small and are overseen by Vanderbilt faculty members from the Master of Fine Arts program.

“The majority of students wanted to have a community of people who had gone through something similar,” explained Kendra DeColo, a graduate student and an instructor for the first series of workshops.

“Everyone has hundreds of stories to tell but to be able to own that and find new ways to express those stories was our main goal,” said DeColo. “I also wanted people to take creative risks. A lot of our students were used to a narrative form and I wanted to help them find ways to really push that and become more lyrical because lyricism is a way of expressing something that is not easily put into words. A lyrical poem that doesn’t necessarily have a linear story can really capture an emotion.”

Christy Cook is one of the workshop participants who found her emotional voice through lyrical poetry writing. Cook’s father died from a brain tumor when he was 52. Then, when she was just 31, Cook was diagnosed with stage 3 colorectal cancer. During her father’s illness and later, while undergoing her own chemotherapy, Cook kept journals and wrote song lyrics to express her complex emotions. But she had never been involved in a structured writing class until she saw a flyer for the VICC classes and signed up.

She was drawn to the workshop as a way to connect with other people who had been touched by cancer.

“Cancer affects everyone in some way, but having come through that experience, you find yourself reaching out to find people who can relate in some way,” explained Cook.

One of her favorite exercises was a “free write,” when instructors chose a topic and gave participants 10 minutes to write about it. Then classmates read their work aloud.

“I think it helped me to open up and share,” said Cook. “I never thought of reading my work aloud to anyone else for my own healing. There were times when I felt an emotional release and when the other participants shared their writing and their stories, it was very touching.”

With cancer as a common theme, the stories were filled with “a lot of light and a lot of shadow.” But Cook found the process of exploring the light and the darkness emotionally therapeutic.

Cook, who has been declared cancer-free, is using the techniques developed in the writing workshop to help express her creative instincts, and she is continuing to write in a variety of styles. Like Sigourney Cheek, she is thinking of turning her thoughts and experiences into a memoir-style book describing the emotional impact of a cancer diagnosis and its aftermath. 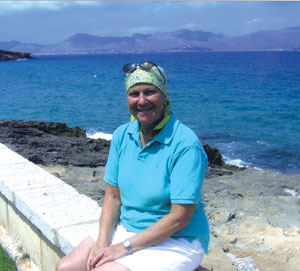 Sigourney at her favorite seaside perch outside of El Barco, the Cheek’s house in Majorca, just before celebrating her 60th birthday in August 2005.

Cheek used her writing to explore the concept of living fully and joyfully, while coping with an illness that was almost surely fatal. Many patients survive for years with the kind of cancer Cheek had, but in her case, the CLL had morphed into Richter’s, a form of B-cell lymphoma for which there is no real cure.

So she delved deep into her soul, sharing her thoughts on what it means to be alive and how to live with purpose.

Carole Hagan, one of Cheek’s best friends, was just one of the readers moved by the messages.

“There is no greater, more defining sign of the strength of a person than the ability to take on the assault of a life-threatening crisis and transform it into something rare and beautiful,” said Hagan. “She had the courage to lay aside all vulnerability, revealing her soul. Each chapter left us breathless.”

Those chapters were filled with the drama of grand adventures. In between bouts of chemotherapy, Cheek and her husband visited a son in New Zealand and went on skiing trips. For her 60th birthday, Sigourney and Jim Cheek invited friends on a trip to Majorca, an island in the Mediterranean Sea where Sigourney spent childhood summers with her archaeologist father and other family members.

She wrote about the Majorca trip with great zest and vowed to repeat the adventure on her 65th birthday. Fate had other plans. A few months before that birthday, Sigourney Cheek passed away as a result of her cancer.

But her thoughts and emotions survive through the writing she shared with others – a rich legacy for those facing a difficult challenge like cancer.

“Her writing was cathartic for her and for her readers,” said Hagan. “Sharing her spiritual journey with leukemia in such an intimate way became her mission: to encourage anyone who was facing any kind of trauma to wrestle it head on. She knew she had been healed through her writing and she chose to share that wisdom. She had embraced her own mortality and showed us the path to do the same.”

I remember a wide road, an open ended journey
Mountains painted with snow, beckoning exploration
A grizzly print engulfing my hand
I remember the most beautiful dawn to follow my last breath
I remember wild rides – river, beast, and air
Living like I’d never die
And if so, would anyone care?
I remember reaching the tallest mountain
That I never wanted to climb
In the peak of summer, it was but a whisper
It was “cancer”, and it was mine

I remember ten days without food,
no comfort gained in tossing
I remember lasagna, and the mouthwatering cry
louder than the screams at the woman who threatened my life
I remember what I had forgotten – the tricks, the trades,
the blame, guilt, and shame
No true arms extended, only a return of inflicted pain

I remember guidance of spirit abounding and bright
Butterfly, birds, healers and light
I remember new family wrapped in various shades
Sharing laughter, music, lessons, and love
I remember feeling the young roots of my rebirth
touching the drought-parched soil
and the exact moment it began to rain…

Note: The writing program is co-sponsored by the Vanderbilt Center for Integrative Health, Vanderbilt University College of Arts and Science and the Cultural Enrichment Program. The Spring workshop series will begin in February 2011. For more information, please call (615) 936-1793 or e-mail cancersurvivor@vanderbilt.edu.