Caring for the Whole Patient

But healing, she notes, is about more than just the physical wounds. As she often tells nursing students: “Look at the whole patient, and not just the hole in the patient.”

This holistic approach is especially important in cancer care.

Many cancer patients develop wound problems after surgery; some require an ostomy (a surgical opening in the abdomen that allows for the collection of waste products). Watts serves as a resource for both the surgical and medical oncology practices for problems that develop with such wounds.

Today, Watts mainly works with breast cancer patients, “a unique population that frequently requires as much emotional support as it does physical,” says Watts, a senior associate in Surgery and clinical instructor in the School of Nursing. 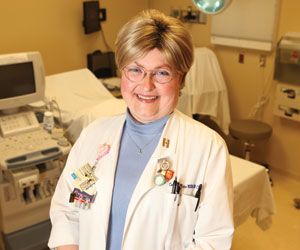 Watts’ path to achieving her childhood dream of becoming a nurse began at Olivet Nazarene University in Kankakee, Ill., where she received her Bachelor of Science in Nursing in 1971. She completed her master’s degree at the University of Tennessee, Knoxville, in 1978. After gaining some administrative and clinical experience, she knew she wanted to work in a university setting – a desire that led her to join Vanderbilt University Medical Center in 1983 as a clinical nurse specialist in general surgery.

She began working with cancer patients in the mid-1990s, when she transitioned to surgical oncology to work with R. Daniel Beauchamp, M.D., who had just been named chair of the division. When Beauchamp became chair of the Section of Surgical Sciences in 2002, Watts remained by his side.

“Carolyn is one of the behind-the-scenes magicians who simply gets things done and who helps to create such a positive environment for patients, providers and staff,” says Beauchamp.

“She is a terrific educator for patients, hospital and clinic staff, nurses in training, medical students and physicians. My patients and I truly rely upon her and her excellent skills on a daily basis.”

Watts’ dedication to wound care has been a constant throughout her career. She founded the VUMC Wound Management Service, is chair of the hospital wound committee, and is active nationally with the Wound, Ostomy and Continence Nurses Society. In 2007, she and colleague Richard Benoit, M.S.N., R.N., completed a successful initiative to document and reduce the incidence of pressure ulcers (or “bedsores”) in the critical care population.

Watts is particularly passionate about supporting the next generation of nurses.

“Working with the up-and-coming nurses is so important. I’m committed to being a strong mentor, so I am always encouraging them to be the best they can be in whatever area they choose to work and to get involved in their professional organizations where they can make a difference on a larger scale. Nurturing and growing the new nurses is a strength that goes hand in hand with education,” Watts says.

But the most gratifying part of nursing, she says, is the impact on patients and families in caring for their physical and emotional needs.

“Nursing is a very holistic profession in so many aspects,” she says. “We can have such a positive impact on patients, and I have always treated each patient the way I would want to be treated or as if they were my own family.”

Photo(s) By: Photo by Susan Urmy