Sowing the Seeds of Innovation

How the American Recovery and Reinvestment Act is stimulating cancer research

In an economic crisis that has led to some of the highest unemployment rates since the Great Depression, Sergey Ivanov, Ph.D., is very relieved to have found a position at Vanderbilt-Ingram Cancer Center.

Ivanov’s wife had accepted a new position at Vanderbilt, so the couple moved from New York to Nashville in 2009. But Ivanov didn’t have a job prospect lined up. He was out of work for several months – and was growing a bit concerned.

But the influx of research grants from the 2009 American Recovery and Reinvestment Act – the “stimulus” bill passed by Congress in February 2009 – had opened up an opportunity that fit with Ivanov’s years of expertise in developing mouse models of disease at the National Cancer Institute and translational research tools in New York University.

He was hired in November 2009 as a research assistant professor in the lab of Wendell Yarbrough, M.D., who was the recipient of two “stimulus” grants from the National Institutes of Health. The two-year Challenge Grants (a highly competitive grant category with about 4 percent of applications funded) provided more than $1.4 million for Yarbrough’s lab to further his research in head and neck cancer and to develop a new mouse model for salivary gland cancer – a rare but vicious type of cancer that can affect the facial nerves.

Little is known about what causes salivary gland cancer or how best to treat it.

“There is no way to treat salivary carcinomas, except for surgery,” Ivanov explains. “And (surgery) is not ideal at times because sometimes nerves get involved. To avoid this surgical intrusion, it would be better to have a different method of treatment.”

Ivanov immediately went to work on developing a new mouse model for salivary gland cancers. Developing a so-called “xenograft” model, Ivanov takes human tumor cells that have been removed during biopsies or surgery, grows them in culture, and transplants them into mice so that the mice grow “human” tumors.

If successful, the mouse model will help researchers determine the molecular pathways that drive this cancer and screen chemotherapy drugs against the disease, Ivanov says.

Ivanov’s new position – and the research project he was hired to work on – are examples of how the federal “stimulus” funding is enriching the research environment at Vanderbilt-Ingram.

The American Recovery and Reinvestment Act has provided some $21 billion for scientific research and development, the purchase of scientific equipment, and science-related construction, according to the Web site www.scienceworksforus.org.

Researchers at Vanderbilt University Medical Center have secured more than $73 million from 155 research grants. The funding is estimated to support 105 FTEs (full-time equivalents, or positions), according to Vanderbilt University’s office of Contract & Grant Accounting.

Of this total, 75 NIH grants were awarded to Vanderbilt-Ingram Cancer Center members, providing more than $40 million to support new and ongoing cancer-related initiatives. The funding is supporting projects that range from the most basic molecular mechanisms of cancer to population-based research to evaluate cancer disparities and risk factors.

In his remarks at the National Institutes of Health in September 2009, President Obama discussed the progress that has been made in cancer research – and the opportunities that the stimulus funding will provide:

“In cancer, we’re beginning to see treatments based on our knowledge of genetic changes that cause the disease and the genetic predispositions that many of us carry that make us more susceptible to the disease. But we’ve only scratched the surface of these kinds of treatments, because we’ve only begun to understand the relationship between our environment and genetics in causing and promoting cancer.”

While there has been much debate about whether research grants actually stimulate the economy in the short-term, the more important impact of this research funding may be to plant the seeds of innovation that fuel scientific progress. NIH director Francis Collins, M.D., Ph.D., said in his introduction of the President:

“I’ve reviewed hundreds of these grant summaries myself. And they propose some of the most innovative and creative directions for research that I have ever seen. …We’re investigating new problems with powerful new tools and looking at old problems from entirely new perspectives.”

The stimulus has contributed to job creation and retention at Vanderbilt-Ingram: Yarbrough’s funding has allowed him to retain one position and to hire one new faculty-level position (Ivanov), and he hopes to add another postdoctoral or junior faculty-level researcher soon. But he feels that the bigger impact is in cultivating research areas that have traditionally been considered too high-risk to fund.

“I think that the short-term gain and the biggest long-term impact will relate to stimulating and advancing projects that are higher risk, but also higher potential gain,” says Yarbrough, an Ingram Professor of Cancer Research and director of the Barry Baker Laboratory for Head and Neck Oncology.

“These projects will, in aggregate, stimulate and advance areas of research that were previously more stagnant.”

Yarbrough’s second stimulus grant supports modeling human head and neck cancers in mice to look for responses to targeted therapies. An effective mouse model would allow for faster testing of potential new drugs for these cancer types and, eventually, to better match patients with specific drugs based on genetic markers within the patients’ tumors.

This funding, Yarbrough says, has allowed his lab to “accelerate our research designed to advance personalized therapy for cancer.”

The funding boost not only allows H. Charles Manning, Ph.D., to accelerate the pace of his existing work, but also to “dig a little deeper into each project.”

Manning, an assistant professor of Radiology and Radiological Sciences, received two stimulus grants (including one Challenge Grant) totaling more than $1.6 million to develop and validate biomarkers that could aid in detecting cancer with non-invasive imaging methods.

“Overall, I think we are able to conduct potentially higher-impact studies,” Manning says. Since these types of imaging studies are costly, the stimulus has allowed Manning to expand the number of imaging studies conducted overall and “grow our repertoire of assays for validation, directly impacting the nature and complexity of questions we can ask in our research.”

Manning’s Challenge Grant supports investigation of a tracer called 18F-fluorothymidine (FLT) in positron emission tomography (PET) scans. FLT is taken up by rapidly dividing cells. Because tumors are composed of rapidly dividing cells, they take up FLT and show up as bright spots on PET scans. Manning is investigating what types of cancers can be evaluated with FLT in mouse models of colorectal cancer and in human patients.

Biomarkers like FLT are important for diagnosis and for monitoring response to cancer therapies, which is a critical component of personalized medicine.

“Molecular imaging biomarkers, like FLT, may enable us to determine whether a drug is working as early as a few hours after administration as well as predict whether patients will continue to respond over time,” Manning says. “This information could spare patients the expense and potential side effects of ineffective therapies.”

The stimulus funding has also provided a major boost to research on lung cancer – the leading cause of cancer deaths worldwide.

David Carbone, M.D., Ph.D., received two grants totaling $1.7 million to advance his lung cancer research. The funding from the first grant (also a Challenge Grant) will be used to evaluate inherited and acquired genetic characteristics of lung cancer in African-Americans.

African-Americans have a significantly greater risk of developing lung cancer – and of dying from the disease – than other ethnic groups. 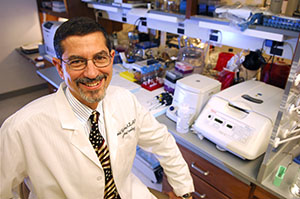 Carbone and collaborators at Meharry Medical College will search for genetic mutations that may explain the higher rates of disease, as well as differences in how some patients respond to treatment.

This project “is a totally new and nationally important study as (African-Americans) have been dramatically under-studied to date – and takes advantage of our unique partnership with Meharry,” says Carbone, a professor of Medicine, Cell and Developmental Biology, and Cancer Biology.

The second grant – a $700,000 supplement to an existing grant – will be used by Carbone and co-investigator Pierre Massion, M.D., to test 100 proteins in the blood for their possible utility in detecting and/or diagnosing lung cancer.

Such biomarkers may allow the development of a simple blood test for diagnosing lung cancer – or identifying patients at high risk of developing the disease.

While these grants have allowed Carbone to hire new staff and have enabled work that he says would not have been possible otherwise, he is concerned about the long term.

The stimulus grants have a “tremendously positive short-term impact, both on the science and on employment in the biomedical research sector,” Carbone says. “But I am concerned about sustainability of the funded initiatives and that there may be a ‘crash’ at the end of funding.”

Sustainability has been one of the major questions about stimulus-funded research. Most stimulus-funded grants have a two-year term, and many wonder what happens after the two years are up.

“There are many new, outstanding projects now funded nationwide, even if just for just two years, that will likely evolve into important programs and be self-sustaining through a variety of mechanisms,” says Manning. “However, we need to be thinking about sustainability for the long-term and how we can keep stimulus-funded research going.”

“We in the research community are thrilled about the influx of stimulus funding, but we are also concerned about an artificial ‘bubble’ that then ‘pops’ when the stimulus funding ends,” she said.

“This speaks to the stability of federal funding for medical research overall, but also the importance of private philanthropy to help take the most promising projects from the stimulus funding and move them forward.”

For now, Ivanov isn’t letting that two-year window worry him; he has a job to do.

Even though he started on his project just a few months ago, he is making rapid progress and thinks he should be able to accomplish the goal of developing the first mouse model of salivary cancer by the end of the two-year period.

“The goals of the grant seem very achievable,” he says. “In this particular case, this is a new model for salivary tumors that has never been created before. And when you consider the lack of information about how salivary tumors grow, the drivers of the disease, and the mutations or pathways involved, this could really be a breakthrough.”

-Dagny Stuart contributed to this story

A two-year, $4.7 million “Grand Opportunities” stimulus grant from the National Institutes of Health is funding a cancer drug discovery program for “triple-negative” breast cancer, a particularly deadly form of the disease that accounts for 25 percent of all breast cancer deaths and disproportionately affects African-American women.

Triple-negative breast cancers do not express receptors for the hormones estrogen and progesterone and the human epidermal growth factor receptor 2 (HER2) – three common targets of breast cancer therapies. This makes triple-negative tumors difficult to treat.

Researchers will try to identify genes that drive the different subtypes of triple-negative breast cancer and then fashion drugs to block the action of the proteins encoded by the genes, with the intent of killing the cancer cells.

Lawrence Marnett, Ph.D., director of the Vanderbilt Institute of Chemical Biology (VICB) and the grant’s principal investigator, predicted that by the end of the two years of the grant, “we will have built a platform to identify the best potential targets for triple-negative breast cancer.”

“This is really personalized drug discovery,” said Marnett, University Professor, Mary Geddes Stahlman Professor of Cancer Research, and director of the A.B. Hancock Jr. Memorial Laboratory for Cancer Research. “We think (it) represents the model for the future.”