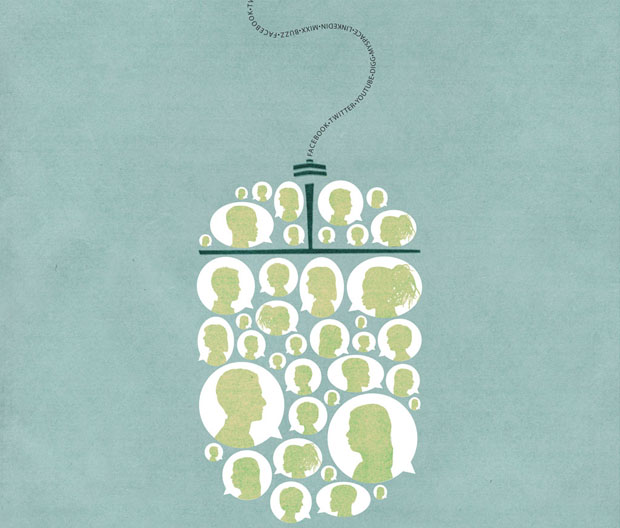 Ilana Horn first discovered Facebook in 2006 after her brother died of a rare form of prostate cancer at only 36.

In her search for photos, his friends directed her to a memorial page on the social networking site that connects family and friends.

“At that time of great grief, it was very important to have the support and love of so many people, near and far,” Horn says.

After that, the associate professor of mathematics education at Vanderbilt’s Peabody College says she became an “avid Facebooker” and dabbler in Twitter, a “micro-blogging” service that allows exchange of short, 140-character updates similar to text messaging.

Since being diagnosed with her own breast cancer, Horn has found social media to be a helpful tool to connect with other young adults she thinks of as cancer “fighters” and “survivors.” She blogs and “tweets” as Chemo Babe (@chemo_babe).

“There are so many things that are difficult about facing cancer,” she says. “It takes persistence and courage. I don’t always feel that way, but I kind of hold Chemo Babe up as a warrior who can take her knocks and get back up ready to keep fighting.”

Social media, including Twitter, Facebook, MySpace and YouTube, allows for connecting and sharing of “user-generated content” made possible because of new Web-based technologies. In some circles, it is seen as a revolution in the way that communities develop, people communicate, and how consumers and organizations or brands relate to each other.

Online communities for cancer survivors are nothing new. The non-profit Association of Cancer Online Resources, ACOR, was established in the mid-1990s to offer a collection of online communities for those impacted by cancer and related disorders. The founder, Gilles Frydman, discovered the need for such outlets when his wife, Monica, was diagnosed with breast cancer and he turned to the Internet to find information.

In some ways, social media is simply the current expression of patient activation and engagement, according to Susannah Fox, a researcher with the Pew Internet and American Life Project. But today, the group that Fox calls “e-patients” are part of a larger cultural change that “assumes access to information, enables communication among disparate groups, and expects progress,” Fox wrote in a January commentary.

Research that Fox reported last summer found that nearly two-thirds of Internet users went online seeking health care information. In addition, one-third of American adults are caregivers for a loved one, and eight in 10 of those folks go online.

“One-third of adults experienced a medical emergency in the past year, either their own or someone else’s. They are online too,” her January commentary noted. “A medical crisis flips a switch in people. It makes them want to become superheroes and save a life if they can. The Internet is very often their weapon of choice.”

Since the Cancer Center’s Facebook page was launched in October 2009, more than 3,000 people have become “fans,” with females age 35-44 as the largest demographic.

For cancer survivors, social media is nothing less than a “game changer,” says Matthew Zachary, founder of I’m Too Young for This, a foundation dedicated to assuring that young adult cancer survivors receive age-appropriate treatment and support.

“Social media are enabling people to make smarter decisions and have access to trusted, credible, peer-reviewed sources of information,” said Zachary, who tweets as @stupidcancer.

Organizations who are doing it well are marrying offline and online activities to share information, he says, citing Planet Cancer as one organization that has successfully embraced social media in its outreach, again to young adult cancer survivors. Its founder, Heidi Adams, has a regular video blog as part of its multi-media website, www.planetcancer.org.

But social media is not just the domain of the young. The fastest-growing group of Facebook users is women in middle age. With the average age of onset of cancer at 67, that is making social media an increasingly attractive arena for centers like Vanderbilt-Ingram Cancer Center to reach survivors, families, newly diagnosed patients, prospective donors and others.

As one example, Vanderbilt-Ingram Cancer Center uses both Facebook and Twitter to provide cancer education, celebrate survivors and advocate for the research that will make a difference in this set of diseases.

Lola Butcher, a reporter for the trade publication Oncology Times, has written about the use of social media by oncologists and cancer centers. She says that she is seeing more and more cancer centers and support organizations embracing social media as an opportunity to communicate in new ways with new audiences.

“Because many forms of social media cost little or nothing, the advent of blogging and fan pages and Twitter and virtual communities has let organizations with tight marketing or media budgets raise their profile with specific audiences,” says Butcher, whose Twitter “handle” is @lolabutcher.

“It’s neat to watch how cancer centers build their ‘brand’ by the way they present themselves on Twitter and Facebook – very humanizing! My reporting found that not-for-profit organizations are actually ahead of corporations in their use of social media, and some of the big-name cancer organizations are leaders in this phenomenon.”

Another trend, she says, is use of Twitter and other social media to share research findings, either published or presented at meetings.

“When I interviewed Dr. Raymond DuBois (former director of Vanderbilt-Ingram Cancer Center and immediate past president of the American Association for Cancer Research) he said he had become aware of research findings through Twitter that he would likely have missed otherwise.”

Both Zachary and Butcher say that cancer centers have a long way to go to reach the potential that social media offers for them and for their patients and families.

“The online presence of marketing and communications staff from centers is great because it positions the centers as friendly, warm and helpful organizations,” Butcher says. “But what centers have to offer ultimately are the physicians and researchers who work there, so getting them online is pretty important.”

Zachary suggests, however, that privacy regulations may make it difficult for hospitals, cancer centers and oncologists to use social media to develop communities and urges intelligent partnerships with advocacy and other organizations.

Butcher also notes that the complexity of the physician-patient relationship is a challenge online. “Some of the pioneering physicians in social media are discussing the ethical issues regarding patients and potential patients who contact them on social networking sites, and I expect some norms and standards for what constitutes appropriate physician/patient interaction online will emerge fairly soon.”

Horn suggests that social media may offer opportunities to deliver dynamic patient education that meets needs on a more individual basis. And there’s no substitute for survivors educating each other, she says.

“When this battle is being waged on your body, it can feel relentless,” she says. “It is a psychic relief to connect with others experiencing the same thing. Some are ahead of you and can offer advice and guidance. Some can benefit from your hard-earned wisdom. But a lot of what we do is root for each other and try to pick each other up when we are down.”

Editor’s note: Connections to each of the sources included in this article were made through online relationships.

Vanderbilt has been a leader in developing its patient portal, MyHealthatVanderbilt.com, which allows for secure access to medical records and e-mail interaction with patients’ medical teams that is included in the medical record. Vanderbilt’s policy currently calls for direct physician-patient interaction to occur in that environment, but patients, families, and “fans” are encouraged to connect with the Medical Center and components like Vanderbilt-Ingram Cancer Center on Facebook and Twitter. YouTube is increasingly being used to share video content, and additional approaches to engage and interact with the public and with patients are continually being developed.