A gift in memory of music industry executive and community philanthropist Phran Galante will support the work of Christine Lovly, MD, PhD, associate professor of Medicine and Ingram Professor of Cancer Research, to improve targeted therapies for lung cancer.

Galante was a champion for homeless pets, sick children and cancer research in her philanthropic endeavors. A lung cancer patient herself, she died on Sept. 23, 2019.

The gift in her memory is being administered by the Shalom Foundation with support from Nashville music artists and executives.

“Even though she’s physically not here, she’s still making a profound difference. When you know the research you’re funding is the same medical treatment that extended your friend’s life — that made such a difference for her — it’s an honor to be a part of it,” the country music star said. 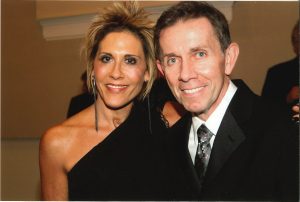 Galante joined RCA Nashville in 1983, where she produced music videos for Alabama, K.T. Oslin and Ronnie Milsap. She was part of the original staff that launched Arista Nashville records and developed marketing plans for numerous artists including Alan Jackson. She then moved to New York City with her husband, Joe Galante, and joined BMG Kidz.

When she and Joe moved back to Nashville in 1995, she began to advocate for more humane care of animals, pushing for improvements to the city animal shelter and founding a community-based group that worked with Nashville to reduce the rate of euthanasia. She raised hundreds of thousands of dollars for Monroe Carell Jr. Children’s Hospital at Vanderbilt with her dedication to the Music City Tennis Invitational. She brightened the hospital stays of children by recruiting music artists to play for them.

“Phran lit up a room with her positive energy and warm, caring nature,” Lovly said.

Galante was in the prime of life when she was diagnosed with EGFR-mutant lung cancer in March 2016. She and her husband scheduled a medical consultation with Lovly, who is an expert on EGFR-mutant and other molecular subsets of lung cancer.

“Meeting the Galantes changed my life. I saw them in clinic and just made a connection,” Lovly said.

Galante and Lovly had much in common, having both grown up in New York and both being animal lovers. Lovly shared stories about Teagan, her deaf dog, and Galante began baking him homemade dog biscuits. The Galantes often invited Lovly into their home, including for Thanksgiving.

“For years now, I’ve gone to her house at Thanksgiving,” Lovly said. “She and Joe were so incredibly generous with everything, including making me a member of their broader family. Phran would have all these fun games to play at Thanksgiving in addition to a really amazing spread of food she had prepared for her family and friends.”

The gift will fund research to eradicate cancer cells that often remain after patients have responded to therapies.