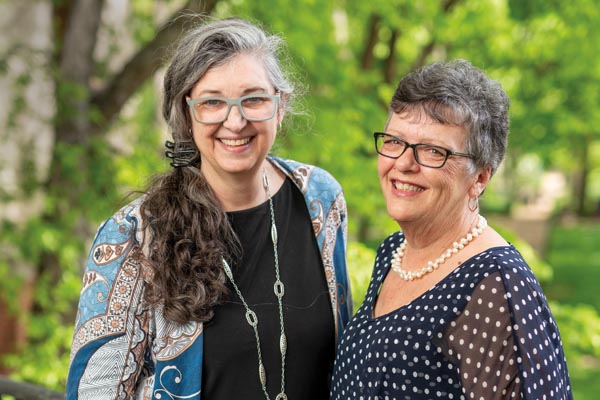 It’s a quandary people often ponder: Is it better to know or not about a predisposition to disease? Cindy Betz decided to confront her unknown health risks.

The 63-year-old Bardstown, Kentucky, woman gave a blood sample for a genetic screening study at Vanderbilt University Medical Center (VUMC). The decision may have saved her life.

The study, conducted through the federally funded Electronic Medical Records and Genomics (eMERGE) network, revealed that Betz carried a rare variation of the BRCA2 gene that greatly increased her risk of developing breast cancer.

Betz did not have a family history of the disease. She’d had her annual mammogram in June 2018 and nothing suspicious was found. Still, Georgia Wiesner, MD, a member of the eMERGE research team who directs the Vanderbilt Hereditary Cancer Program, referred Betz to the Vanderbilt Breast Center’s High-Risk Clinic.

In December 2018, nurse practitioner Tracey DeWire was performing Betz’s breast exam prior to the scan when she suddenly looked concerned. Betz put her hand where DeWire’s was. “Oh!” she exclaimed. There was a lump in her left breast.

A needle biopsy was scheduled the next day. Betz watched the procedure on the ultrasound screen. “The only way I can deal with this is if I’m learning something while we do it,” she explained.

The ultrasound revealed a tumor about the size of a large freshwater pearl. It had already invaded the breast tissue.

Because patients with BRCA1 or BRCA2 variants have a high risk of multiple breast cancers as well as ovarian cancer, Betz opted for a bilateral mastectomy in late January to be followed several weeks later by a hysterectomy to remove her ovaries.

“I feel really blessed,” she said. “This thing was growing fairly fast. It wasn’t there in June, and it was in December. It would have been really bad if I had waited a year for (the next) mammogram.”

Thanks to eMERGE and other studies, “we are finding clinically important gene variants in healthy people who do not have a personal or family history of disease associated with these genes,” said Wiesner, Ingram

At the same time, she added, “VUMC has the clinical expertise to care for patients with high-risk gene variants for hereditary syndromes including cancer and cardiovascular disease.”

The eMERGE network was established in 2007 by the National Human Genome Research Institute, part of the National Institutes of Health. Comprised of 10 biorepositories and clinical sites, eMERGE links DNA samples from more than 100,000 participants to their “de-identified” medical records, in which personal information that could identify them has been deleted. Wiesner notified Betz about her mutation before her de-identified records were submitted.

VUMC and its BioVU biorepository, which contains nearly 250,000 DNA samples, is one of the original participants in the network. VUMC also serves as the network’s coordinating center.

The eMERGE network “is an important step toward the routine use of genetic data in routine health care,” said Roden, the Sam L. Clark, MD, PhD Professor of Medicine and who is professor of Medicine, Biomedical Informatics and Pharmacology. The first two phases of eMERGE examined the role of common genetic variants across many diseases and in variable drug responses. Since 2015, the focus has been on sequencing genes like BRCA2 to find rare variants that carry a high risk of serious diseases like cancer.

As part of the project, Betz was one of 2,488 VUMC patients whose DNA samples were screened for mutations in 109 genes. About 6% were found to have a rare genetic variant that might dramatically increase their risk for cancer, certain types of heart disease or other diseases. These patients and their family members have been offered appointments with genetic medicine disease specialists to see if they have disease, Roden said, and to advise them about follow-up preventive and diagnostic actions.

When offered the chance to participate in the study, Betz didn’t hesitate. When the results came back positive for BRCA2, she got a call from Wiesner.

“Bless her heart, she gave me an hour-long introduction into what that meant,” Betz continued. “She explained that I would need to have these high-risk scans done. She worked with my gynecologist and ordered the scans. She really went out of her way.”

“I have never had such good care in my life,” she said.

But for Betz, personalized medicine means patients must be just as involved as their doctors. Particularly if advised by your physician, “get your genetic testing done,” she said. “If it can save my life, it might save yours, too.”