Survivor Gets Back on Course

On April 17, 2006, Jeff Kidwell bent over to pick up a 5-gallon paint bucket and felt a stabbing pain in his back. The residential contractor shook it off — pains like that seem to come with the job. That evening there was blood in his urine. Still, he wasn’t concerned.

At 5 o’clock the next morning, excruciating pain “like someone was kicking me constantly” propelled Kidwell to the local hospital emergency room. The doctor ordered a CT scan and then had to deliver some hard news.

“He told me I had a mass on my kidney, about 17 centimeters in size and it was called kidney cancer,” recalled Kidwell.

It was a shocking diagnosis. Kidwell was just 42…a husband and father of three sons. Energetic, plain-spoken and athletic, he exudes a can-do attitude. He refereed high school football games for nearly two decades and coached his middle son’s baseball team – all while serving as the Building Official and Zoning Officer for the city of Clinton, Tenn. Eventually, the avid golfer and University of Tennessee sports fan became a residential contractor. He never seemed to stop moving.

But the diagnosis of kidney cancer would trigger a marathon test of his endurance and his capacity to take risks.

“To be honest, I only really felt sorry for myself one day and that was the very first day,” said Kidwell. “At that point, I drew a line in the sand and said, ‘I’m going after this.’ Whatever it takes, however long it takes, I’m going to do whatever I need to do. The fight is on.”

Kidwell had no idea how difficult or lengthy the fight would be. While kidney cancer (also known as renal cell cancer), isn’t common, it is often lethal. The American Cancer Society estimates 57,760 Americans are diagnosed annually and 12,980 die from the disease. The number of cases is climbing. Many kidney tumors are found by accident, when the patient has a scan for something else. Because so many patients are getting sophisticated CT scans or MRIs these days, more tumors are being discovered before symptoms arise. Tobacco smoking and the increase in obesity also may contribute to the rising number of renal cell cancer cases.

Kidwell had none of the known risk factors, which also include family history of the disease and exposure to chemicals like industrial solvents. What Kidwell did have was a very large tumor and a local urologist who referred him to Vanderbilt-Ingram Cancer Center in Nashville, where Kidwell decided to launch his battle against cancer.

Michael Cookson, M.D., Patricia and Rodes Hart Professor of Urologic Surgery at Vanderbilt-Ingram, told Kidwell the tumor was encapsulated, so the entire kidney had to be removed. Would that be enough for a cure? Additional scans revealed a spot on one ofKidwell’s lungs – evidence the cancer might be spreading.

Kidwell’s doctors suggested a clinical trial of a new drug, and he didn’t hesitate to sign up.

“Clinical trials are the right thing to do,” explained Kidwell. “I’m the first in line because, if it helps me, it’s going to benefit someone else down the line. If there is a clinical trial in one of my doctors’ areas, I’ll sign on because that’s how they get the data and the research.”

The fact that there were new investigational drugs to try is evidence of advances in treatment for renal cell cancer. Previously the only option was surgical removal of the tumor. For patients with localized early-stage disease, surgery sometimes can provide a cure. But all too often, patients are at high risk for a recurrence, and unlike breast cancer or colon cancer, there is no standard adjuvant therapy for renal cell cancer.

“What has made it so difficult to treat over the years has been its resistance to common therapy like chemotherapy or even biologic therapies,” said Jeffrey Sosman, M.D., professor of Medicine at Vanderbilt-Ingram. This resistance to common therapy has long puzzled cancer investigators like Sosman, who has been working for years to improve the use of drugs that either stimulate the immune system (interleukin-2) or those that choke off the blood supply (anti-angiogenic agents) to the tumor. 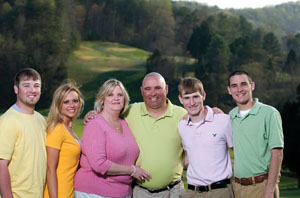 The Kidwell family – (left to right) son Brad and his wife Brittany, wife Connie, Jeff, and sons Brice and Blake – enjoys a day together.

For 26 weeks, Kidwell drove to Nashville for weekly drug infusions. But by February 2007, scans and a biopsy confirmed two new potential tumors, one in each adrenal gland. The initial clinical trial didn’t seem to be stopping his cancer.

Sosman’s colleague, Igor Puzanov, M.D., M.S.C.I., assistant professor of Medicine, offered Kidwell a new trial of high-dose interleukin-2 (IL-2), which stimulates the body’s immune system, combined with a drug called bevacizumab or Avastin. Bevacizumab is one of a new class of drugs that targets angiogenesis – the formation of new blood vessels that tumors need to grow and thrive. These drugs were created to interfere with the effects of mutations like those in the von Hippel-Lindau (VHL) gene, which is implicated in kidney cancer.

“Because VHL is mutated, the cell releases a number of factors that promote blood vessel formation or angiogenesis,” explained Sosman.

“The cancer cell behaves like it’s starving for oxygen and reacts that way. People realized that if you attack some of those factors that promote blood vessel formation, you might have a very effective therapy.”

But first, Jeff Kidwell had to get through the high-dose IL-2 therapy. Introduced for kidney cancer therapy in the early 1990s, IL-2 is appropriate for a subset of patients who are young and healthy, with no heart or lung disease.

“Vanderbilt-Ingram is one of the selected Centers of Excellence for IL-2 therapy in the southeast region of the United States,” said Puzanov.

“This designation recognizes that we have special operating procedures in place for this very intensive therapy, and we are now No. 5 in the nation by volume of cases.”

Approximately 15 percent of patients who receive high-dose IL-2 experience a significant shrinkage of disease that can last
several years. But more importantly, about 5 percent to 8 percent of patients can be cured. Investigators still don’t know how to identify those who will be helped.

Jeff Kidwell was willing to try, even though the treatment required five-day stints in the hospital with several intravenous doses of the drug every day. Then there were the side effects.

“It was the toughest drug I’ve ever tried in my life. It beat me down so fast,” remembered Kidwell. “I had everything – nausea, rigors, rash, peeling skin. I just quit eating and took the fluids.”

In between the hospitalizations for IL-2, Kidwell came to Nashville for infusions of Avastin. More side effects.

“God love my care partners because they had to do the tough part. My kids had to pick me up and put me in the recliner and take me out of it,” said Kidwell. “My wife and my kids are my strength.”

During those months, Kidwell and his family found reason for optimism. Scans of his adrenal glands and lung showed the tumors were shrinking. His remaining kidney started to function more normally.

Eventually, like many other patients, Kidwell couldn’t tolerate additional treatments and had to stop. Surgeons removed the tumor in his lung and confirmed it was renal cell cancer. They took out both adrenal glands and after a rib fracture, removed a small amount of bone from his ribs.

But in recent months, the disease appears to have stabilized. His scans are clear. He appears to have benefitted from the explosion of new targeted drugs that have been developed in the last decade.

“We started with just high-dose IL-2 and interferon alpha in the early 1990s and had nothing else to offer patients for years,” said Puzanov. “But in 2005, Nexavar was approved, then Sutent and Avastin. Now we have half-a-dozen drugs that may slow down the disease.”

Sosman points out that while these drugs stabilize the disease and shrink the tumor, they don’t make it go away. 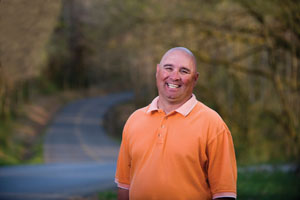 “Cancer is a very long road. It’s winding, and it’s really bumpy…When you hit the bump, knock the dirt off and get back up.”

“These drugs make the disease more chronic, like diabetes, but they don’t cure it,” explained Sosman. “These patients will relapse and then get another drug in the family. Now I see patients who are five or six years out from diagnosis.”

Sosman and Puzanov, with the help of patients like Kidwell, are engaged in new clinical research trials, trying to find the answers that will finally lead to a cure. The cancer investigators say there is a great need for more financial support for renal cell cancer research.

These days, Jeff Kidwell can’t stop smiling when he talks about the long stretch of time since anything new appeared on his scans. He’s golfing again, going to UT games and spending time with his family.

“Cancer is a very long road. It’s winding, and it’s really bumpy,” said Kidwell. “When you hit the bump, knock the dirt off and get back up.

The good Lord has kept me around to do something. I don’t know what it is, but if I can touch somebody who has kidney cancer by sharing my story, my journey for the last four years has been worthwhile.”

A diagnosis of kidney cancer used to require the same initial treatment – surgical removal of the entire organ.

“Twenty years ago there was one operation and that was to make a big, flank incision through your side, at least six to eight inches, and remove your entire kidney,” explained S. Duke Herrell, M.D., associate professor of Urologic Surgery at Vanderbilt-Ingram. “That was done whether your tumor was the size of a dime or a football.”

Over the past eight years, Herrell has been getting excellent results with laparoscopic and now robotic surgery for removal of kidney tumors, preserving the rest of the kidney (partial nephrectomy).

For most tumors less than 7 centimeters, removing just the cancerous part of the kidney appears safe for cancer control and improves the patient’s renal function, quality of life and overall survival. Patients undergoing this “minimally invasive” surgery also experience less pain and have a shorter recovery time.

Herrell, director of Minimally Invasive Urologic Surgery and Robotics, has also started and developed a program using new ablation techniques, such as radiofrequency and cryoablation, to destroy some smaller kidney tumors. And he and his colleagues in Biomedical Engineering are improving robotic surgery by incorporating preoperative imaging, which shows critical internal structures during robotic kidney surgery.

“I enjoy the challenge of being sent some of the most difficult cases by my colleagues and of developing new innovations and programs that produce cures while reducing pain and suffering for our cancer patients.”

Editor’s note: Jeff Kidwell died December 2, 2011 at his home in Clinton, Tenn., at age 48. The family requests memorials be made to the Vanderbilt-Ingram Cancer Center or the Memorial Fund Hope Lodge.