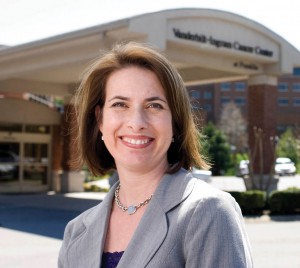 A change in career direction during college led Karen Munyon to radiation therapy – and to her current position managing Vanderbilt-Ingram’s radiation oncology clinics.

Karen Munyon, MBA, BSRT, grew up thinking she was going to be a pharmacist; she was a pre-pharmacy major, had worked in a pharmacy, and had relatives in the field. But the year she applied to the pharmacy program, there were only 60 slots available and she was placed on the alternate list.

Unsure of her options, she went in search of “something in the medical field” that matched her interests and course work. Then she visited the basement of the College of Allied Health at the University of Oklahoma, where she was introduced to the world of radiation therapy – the medical use of radiation to treat cancer – and she has never looked back.

“The moment I saw the radiation therapy program, I knew it was what I wanted to do,” said Munyon. “It had lots of computer and high tech applications. Something just clicked in me.

“It was almost like an act of God – the door opened, and I went right through it.”

Munyon graduated from the University of Oklahoma in 1991 with a degree in radiologic technology and later received her MBA from Oklahoma City University in 1994. She joined Vanderbilt in 1997 as a radiation therapist. After five years in that role, she was asked to lead the project to build and manage Vanderbilt-Ingram Cancer Center’s satellite radiation oncology centers.

Now Munyon is the manager of the Vanderbilt-Ingram Cancer Center at Franklin and Gateway-Vanderbilt Cancer Treatment Center in Clarksville.

At first, her parents were not sure of her new career direction.

“I’m a real softy,” she admitted. “And my parents didn’t think I would be able to handle the population of patients and deal with this kind of work. And it can be really hard.

“You build a rapport with your patients and families. You see the same patient every day for two to eight weeks. You really get to know them. The hardest days are when you lose a patient.”

Some of the most heart-warming experiences involved pediatric patients.

“When you treat a child, they are so trusting and accepting, and there is no fear of dying,” she said. “They are always positive and smiling.”

Even though Munyon is no longer actively treating patients, she is still very much involved with their care. In her role as manager, she handles the patient satisfaction surveys.

“It’s what keeps me coming back to work every day,” said Munyon. “People are so thankful and appreciative. They are so grateful for the things we do for them. Even if we can’t cure them, they know we are here to help them.

“I may not be the one treating them, but getting that feedback, it gives me a sense that I’m doing a good job when someone is happy with their care. It is a reflection of the center as a whole.”

Munyon’s impact extends beyond the centers as well. She has been very involved in the local Relay for Life in Williamson County, and the Center has stepped up to be a presenting sponsor of this year’s American Cancer Society event in June.

“Karen is a great ambassador for Vanderbilt-Ingram with our patients and with neighbors of our outlying centers,” said Cynthia Manley, associate director for Communications at Vanderbilt-Ingram. “She is very dedicated to making sure that we are truly a part of the communities we serve.”

One of Munyon’s greatest joys is meeting a person who was treated in one of the satellite facilities and hearing they had a positive experience.

“To know that you gave a person one more day with someone they love or care about is such a satisfying feeling. I really do love my job.”