A team of Vanderbilt researchers has revealed some of the mechanisms by which polyps develop into colorectal cancer, setting the framework for improved surveillance for the cancer utilizing precision medicine.

Their study, published Dec. 14, 2021, in Cell, describes findings from a single-cell transcriptomic and imaging atlas of the two most common colorectal polyps found in humans: conventional adenomas and serrated polyps. They determined that adenomas arise from expansion of stem cells that are driven by activation of WNT signaling, which contributes to the development of cancer, while serrated polyps evolve into cancer through a different process called gastric metaplasia. The finding about metaplasia, an abnormal change of cells into cells that are nonnative to the tissue, was surprising, the researchers said. 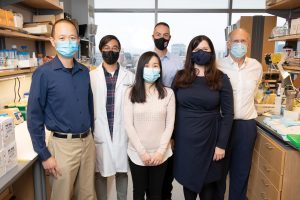 From left to right, Ken Lau, Bob Chen, Qi Liu, Joseph Rolland, Martha Shrubsole and Bob Coffey pose for a photo for a photo in the plaza Friday, December 10, 2021 In the Coffey Lab at Vanderbilt University Medical Center in Nashville, Tennessee. Photo by Erin O. Smith.

“Cellular plasticity through metaplasia is now recognized as a key pathway in cancer initiation, and there were pioneering contributions to this area by investigators here at Vanderbilt,” said Ken Lau, PhD, associate professor of Cell and Developmental Biology, one of the study’s corresponding authors. “We now have provided evidence of this process and its downstream consequences in one of the largest single-cell transcriptomic studies of human participants from a single center to date.”

The researchers did an integrative analysis of 128 datasets of tissue samples from 62 tumors. They performed single-cell RNA sequencing, multiplex immunofluorescence and multiplex immunohistochemistry on the samples, which were collected from diverse sex, racial and age groups.

The cells from serrated polyps did not exhibit WNT pathway activation nor a stem cell signature. Moreover, the researchers observed that these cells had highly expressed genes not normally found in the colon, leading them to hypothesize that metaplasia plays a role in how serrated polyps become cancerous.

The study provided a number of other findings of clinical significance. For instance, sessile (flat)  serrated lesions can be challenging to identify, and the study suggests biomarkers that may confirm their diagnosis. The study revealed much about the mechanisms of sessile serrated lesions in regulating the tumor immune landscape.

“The findings in our atlas lay the foundation for opening novel strategies for interception of cancer progression, including better surveillance protocols, chemoprevention and prebiotic and probiotic therapies,” said Martha Shrubsole, PhD, research professor in the Division of Epidemiology, and a corresponding author.