How to reduce cancer risk

The barrage of cancer prevention messages is a near constant in our Facebook feeds and on news broadcasts. Eliminate sugar from your diet. Eat more blueberries. Don’t grill your meat. Use only organic household cleaners. Filter your tap water. Stop using deodorant with aluminum. Get more sun exposure because vitamin D is good. Get less sun exposure to protect your skin. Forget all that and just exercise 30 minutes every day.

With oncologists now agreeing that about 90 percent of all cancers are preventable, we should all be able to make a few changes and guarantee we never get cancer, right? This is most certainly wrong.

What’s on the menu?

Does an apple a day keep the oncologist away?

Unfortunately, there is no silver bullet to prevent cancer. Cancer happens when a cell’s genes are altered, which allows the cell to grow too much. About 5 to 10 percent of cancers are caused by inherited gene alterations. In the other 90 to 95 percent, the alterations are caused by a mixture of genes, aging, environment and lifestyle.

“In most cases for a person-specific cancer, we’re not going to know what caused it. It would be really nice to say, ‘This is my exposure and I just won’t do that anymore.’ But that is essentially impossible to tease out,” said Georgia Wiesner, M.D., Ingram Professor of Cancer Research and director of the Clinical and Translational Hereditary Cancer Program.

“Theoretically we have a lot of control over whether we get cancer, but in practice it is very hard.”

What you can do

Many cancers are caused by the inevitable effects of aging, as our cells naturally make mistakes over a lifetime of copying 3 billion DNA building blocks over and over again.

“One of the reasons there’s an epidemic of cancer is because more people are living longer. Cancer is a disease that becomes more common as people grow older,” said Michael Neuss, M.D., chief medical officer at Vanderbilt-Ingram Cancer Center.

Other exposures happen naturally and are largely out of our control, such as infectious agents, pollution and radon gas. Many known carcinogens, like formaldehyde and asbestos, are found in the workplace but are carefully regulated to avoid exposure.

Among factors we can control, the top recommendation is to stop smoking and using tobacco products. According to the National Cancer Institute (NCI), smoking cigarettes causes about 30 percent of all cancer deaths in the U.S. and is the leading cause of lung, oral cavity, bladder, esophageal, kidney, pancreatic and stomach cancers and acute myelogenous leukemia (AML).

“In the hierarchy of things you can do to keep from getting cancer, not smoking is far and away the most important thing,” Neuss said.

With smoking rates declining, attention is now turning toward reducing obesity. The second major cancer prevention recommendation is to maintain a healthy weight by eating a balanced diet and exercising regularly.

“Obesity is a major health problem in the U.S. and is related to multiple cancers and many other diseases. We can try to reduce obesity by reducing calorie intake and becoming more physically active,” said Wei Zheng, M.D., Ph.D., MPH, Ingram Professor of Cancer Research and director of the Vanderbilt Epidemiology Center.

Many of the myths around cancer prevention relate to diet, and Zheng and Xiao-Ou Shu, M.D., Ph.D., are co-leaders of Vanderbilt-Ingram’s Cancer Epidemiology Research Program and experts in large-scale nutritional epidemiologic studies. Their research seeks to identify lifestyle factors, including diet and physical activity, which may impact cancer. They have found, for example, that eating soy food and cruciferous vegetables like broccoli, drinking green tea and exercising regularly may reduce the risk of cancer. (See the “What’s on the menu?” sidebar for more on these findings.)

But they caution that there are limits to these findings.

“Most of the lifestyle factors that are relevant to cancer etiology are long-term exposures since cancer takes a long time to develop. We study free people whose lifestyle may differ from time to time, and thus it is often difficult to measure long-term exposures. Many epidemiological studies identify associations, and these associations may not necessarily be causal,” Zheng explained.

“I’m very hopeful in the next five or 10 years that there will be a lot of breakthroughs to really confirm some of the associations.”

“Even good things can become bad if you overdo it. Don’t go overboard. Some people cut out meat completely and eat only high-fiber foods. That actually could be potentially harmful. You don’t get the balance of nutrients. A low-protein and high-fiber diet has been previously linked to increased risk of esophageal and stomach cancer,” she said.

Shu says lower-to-moderate intensity exercise has been shown to be just as beneficial as high-intensity activity in cancer prevention.

“You don’t really need to run the treadmill and do aerobics to achieve the effects. You can do a moderate but consistent exercise with lower intensity, such as walking,” she said.

For Jason Ingram, happiness is a quiet morning kayaking the Caney Fork River. Growing up in Franklin, Tennessee, he always loved the outdoors, but after surviving Hodgkin’s lymphoma, he’s channeling that love into a healthier lifestyle in hopes of preventing more cancer. 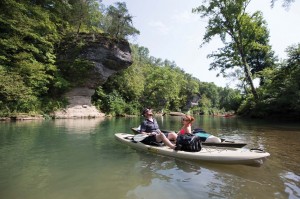 Jason Ingram with his wife, Michelle, on the Caney Fork River. Photo by Joe Howell.

With medical advancements helping more people survive cancer, the incidence of a second cancer later in life is on the rise.

Ingram was 31 when he was diagnosed in December 2006, after noticing that a tick bite wasn’t healing as quickly and feeling like he had laryngitis for months. He actually had developed a huge mass under his sternum that was crushing his esophagus.

Over the next three years, he had countless chemotherapy and radiation treatments plus two stem cell transplants—one autologous of his own cells and, after the cancer reappeared in his abdomen, another allogeneic transplant of his brother’s cells.

Just before the five-year all-clear milestone in 2013, Ingram relapsed. He had laparoscopic surgery to remove the new tumor around his spine, more chemotherapy and injections of his brother’s T-cells to boost his immune system.

Now a year later, his scans are all clear and he’s focused on living a healthier life.

“I was a heavy smoker and could go through three packs a day. It had been eight years since I had been to the doctor, and I weighed about 240,” said Ingram, who works as director of sales at Corsair Artisan Distillery.

He and his wife, Michelle, who married on May 17, go hiking, kayaking and biking, always slathered in sunscreen.

“My wife is a workout nut and she’s on me to be active. I wanted to lose weight to feel better. I didn’t want to be winded going up stairs or carrying stuff.”

They focus on a low-calorie diet and eat a lot of chicken and fish, limiting red meat to about once a week.

“I don’t sacrifice my cookies though!” Ingram laughs. “There’s no reason to be miserable.”

Ingram believes he may have had a family history that played into his lymphoma, but says his smoking and eating habits certainly contributed.

“Do I think getting cancer had a lot to do with my lifestyle? I do. Now I’m active and try to maintain a healthy weight level. My lifestyle has completely changed. I could never puff on a cigarette again. I’m just more aware of what I put in my body,” he said.

“Am I scared? Sure. But I’m used to living with it now. I remember realizing that I may have cancer, but it won’t have me. I was tired of being tired and wanted to get busy living. If you don’t, it will drag you down. One day at a time, I keep living my life.”

The bottom line is that there is no one thing that can prevent cancer. Cancer is a combination of the genes you are born with, the way those genes replicate over a lifetime, and how your lifestyle and environment interact with those genes.

“Cancer is caused by multiple factors. You cannot think about one pill or one intervention that can prevent cancer. It’s really a combination of many things. Don’t dream about that easy fix,” Shu said.

There are also no guarantees that a certain lifestyle or environmental factor will or won’t cause cancer.

“There are people with lung cancer who never smoked, and there are people who smoked like the proverbial chimney and never got lung, bladder or pancreas or any of the other cancers associated with smoking,” Neuss said.

“If I was going to have three messages, they would be: don’t smoke, don’t get fat and don’t spend too much time in the sun.”